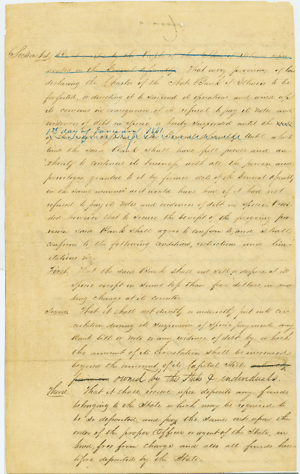 Section 1st Be it enacted by the People of the State of Illinois represented in the General Assembly That every provision of law declaring the Charter of the State Bank of Illinois to be forfeited, or directing it to suspend its operations and wind up its concerns in consequence of its refusal to pay its notes and evidences of debt in Specie; is hereby suspended until the end of the next Session of the General Assembly, ^1st day of January 1841,^ Until which time the said Bank shall have full power and authority to continue its business with all the powers and privileges granted to it by former acts of the General assembly in the same manner as it would have had if it had not refused to pay its notes and evidences of debt in Specie, Provided however that to secure the benefit of the foregoing provision said Bank shall agree to conform to, and shall conform to the following conditions, restrictions and limitations, viz.

Section 2. Whenever the said Bank shall accept the provisions of this Act and the President thereof shall file in the Office of ^the^ Secretary of State a certificate of the fact of such acceptance under the Corporate seal of said Bank, then from and after the filing such certificate, shall said Bank shall be considered as entitled to the benefit of this act, and shall be bound by all the restrictions conditions,
<Page 4>
restrictions and limitations herein contained
Section 3d. This act shall not be construed so as to impair any rights acquired by individuals, or to prevent the holders of its notes and other evidences of debt, from bringing and maintaining suits against said Bank for any Notes or other evidences of debt which they now have or may hereafter hold against it, and the provisions of this section shall apply as well to notes heretofore issued, as to notes which may hereafter be issued by said Bank.
Section 4th The said Bank shall at all times receive its own bank bills in payment of any demand, debt or claim due to the Bank, from any individual or corporation whatever.
Section 5th The said Bank shall dispose of all of the State ^bonds^ Stock now owned by it, as soon as the same can be disposed of at par. ^and which were taken ^issued for the purpose of increasing the^ by her in payment of the subscribtion of stock on the part of the State, as soon as the same can be disposed of at par^