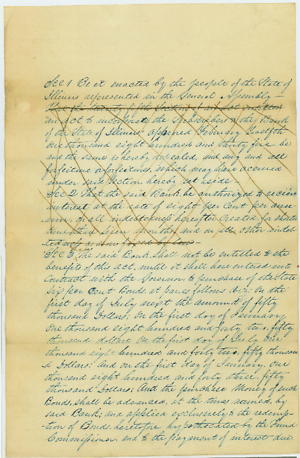 Sec[Section] 1 Be it enacted by the people of the State of Illinois represented in the General Assembly: That the twenty-fifth Section of an act entitled “an act to incorporate the Subscribers to the Bank of the State of Illinois” approved February Twelfth one thousand eight hundred and thirty five, be and the same is hereby, repealed, and any and all forfeiture or forfeitures, in which may have accrued under said Section, hereby set aside.
Sec 2 That the said Bank, be authorized to receive interest at the rate of eight per Cent per annum, on all indebtedness hereafter Created, for shorter time, than Seven months, and on all other indebtedness as now fixed by law.
Sec 3 ^That^ The said Bank, shall not be entitled to the benefits of this act, until it shall have entered into Contract with the Governor, to purchase of the State Six per Cent Bonds, at par, as follows Viz: on the first day of July next the amount of fifty thousand Dollars; On the first day of January One thousand eight hundred and forty two, fifty thousand dollars; On the first day of July one thousand eight hundred and forty two, fifty thousand Dollars; And on the first day of January, One thousand eight hundred and forty three, fifty thousand Dollars; And the purchase Money of such Bonds, shall be advanced, at the times named, by said Bank; and applied exclusively to the redemption of Bonds, heretofore hypothecated by the Fund Commissioner, and to the payment of interest due,
<Page 2>
on State indebtedness, other than to said Bank.
Sec 4 To avail said Bank, of the provisions of this act, the President and Directors thereof, shall pass an Order accepting the same, at their first meeting after the passage of this act.
Sec 5 That during the time the said Bank, shall Continue to suspend the payment of Specie, the inhabitants of this State, who are indebted to them, upon Notes heretofore discounted, shall be allowed to pay their debts in instalments, at the rate of ten per Cent, upon each and every renewal of the amount due, upon Condition that such debtors, shall execute new notes with Satisfactory Security, and pay the aforesaid per Cent and the interest in advance, according to the usages of Banking.
<Page 3>
Sec 6 Hereafter no debtor ^director^ of this bank, or firm, with which he or the President may have been Connected, shall become liable to the institution, either as principal or Security, for more than five thousand dollars, at any one time.
Sec. 7. The charter of said Bank shall expire in two years after the passage of this Act, any thing in the original Charter to the Contrary notwithstanding.
<Page 4>
[docketing]
No 189House
[docketing]
A Bill for an act Concerning the State Bank of Illinois ^& Bank of^
[docketing]
2
[docketing]
[02]/[26]/[1841]
Com[Committee of the] whole
[docketing]
[02]/[25]/[1841]
lost
Feby 25th
[docketing]
[02]/[25]/[1841]
Engrossed
[docketing]
12
[docketing]
[02]/[25]/[1841]
passed
[docketing]
[02]/[25]/[1841]
Brown of Ver
Logan
Murphy of Perry
Gillespie
Leary

A Bill concerning the State Bank of Illinois. [1841-02-25]. https://papersofabrahamlincoln.org/documents/D200266c. The Papers of Abraham Lincoln Digital Library.