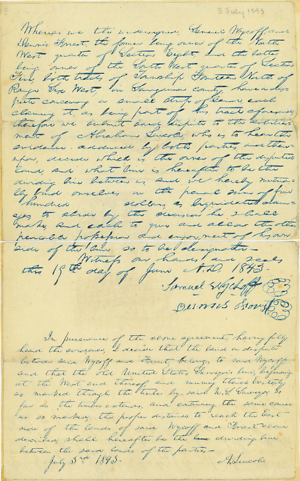 Agreement between Samuel Wyckoff and Dennis Forrest, 19 June 18431
Whereas we the undersigned, Samuel Wycoff, and Dennis Forrest, the former being owner of the North West quarter of Section Eight, and the latter being owner of the South West quarter of Section Five, both tracts of Township Fourteen North of Range Six West, in Sangamon county,2 have a dispute concerning a small strip of land, each claiming it, as being part of his tract aforesaid; therefore we submit said dispute to the arbitrament of Abraham Lincoln, who is to hear the evidence adduced by both parties, and thereupon, decide which is the owner of the disputed land, and what line is hereafter to be dividing line between us, and we hereby mutually bind ourselves in the penal sum of five hundred dollars, as liquidated damages, to abide by the decision he shall make, and each to give and allow the other peacable possession and enjoyment of his own side of the line so to be designated—
Witness our hands and seals this 19th day of June A.D. 1843—
Samuel Wyckoff
seal Dennis Forst
seal
[endorsement]
07/03/1843
Abraham Lincoln
In pursuance of the above agreement, having fully heard the evidence, I decide that the land in dispute between said Wycoff and Forrest, belongs to said Wycoff, and that the old United States Surveyor’s line, beginning at the West end thereof, and running thence Easterly as marked through the timber by said U.S. Surveyor, so far as the timber extends, and continuing the same course as so marked, the proper distance to reach the East side of the lands of said Wycoff and Forrest above described, shall hereafter be the line dividing line between the said lands of the parties—
July 3rd 1843—A. Lincoln
<Page 2>
[certification]
06/04/1844
Benjamin Talbott
Recorders office City of Springfield June 4th 1844
I, Benjamin Talbott Recorder for said County do Certify that the within Agreement between Samuel Wyckoff and Dennis Forest is duly Recorded in my office in Book V. pages 361 & 362
Benjamin Talbott R. S C[Recorder of Sangamon County]
[docketing]
06/04/1844
Filed for Record at 7. oclock A—M June 4th 1844—
[docketing]
Wyckoff & Forrist
1Abraham Lincoln wrote the main part of the document, which was signed by Samuel Wyckoff and Dennis Forrest. Lincoln also authored and signed the endorsement. Benjamin Talbott authored and signed the certification at the end.
2The land described here is located in western Sangamon County, approximately three miles west of Loami.