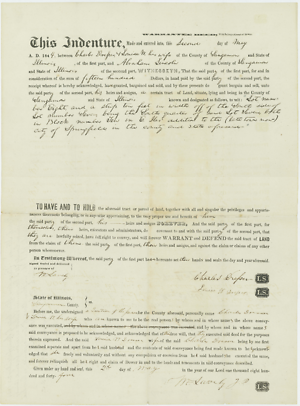 Deed of Charles Dresser and Louisa W. Dresser to Abraham Lincoln, 2 May 18441
WARRANTEE DEED, With Relinquishment of Dower.
This Indenture, Made and entered into, thisSecondday ofMayA.D. 1844, betweenCharles Dresser, & Louisa W. his wifeof the County ofSangamonand State ofIllinois, of the first part, andAbraham Lincolnof the County ofSangamonand State ofIllinoisof the second part, WITNESSETH, That the said partyof the first part, for and in consideration of the sum offifteen hundredDollars, in hand paid by the said partyof the second part, the receipt whereof is hereby acknowledged, havegranted, bargained and sold, and by these presents do grant bargain and sell, unto the said partyof the second part,hisheirs and assigns,acertain tract of Land, situate, lying and being in the County ofSangamonand State ofIllinoisknown and designated as follows, to wit:"Lot number Eight, and a strip ten feet in width off of the South side of Lot number Seven, being the South quarter of said Lot Seven, both in Block number Ten in E. Iles' addition to the (late town now) city of Springfield, in the county and state aforesaid–"2
TO HAVE AND TO HOLD the aforesaid tract or parcel of land, together with all and singular the privileges and appurtenances thereunto belonging, or in any-wise appertaining, to the only proper use and benefit ofhimthe said partyof the second part,hisheirs and assigns FOREVER, And the said partyof the first part, forthemselves, theirheirs, executors and administrators, do covenant to and with the said partyof the second part, thatthey arelawfully seized, have full right to convey, and will forever WARRANT aud DEFEND the said tract of LAND from the claim ofthem–the said partyof the first part,theirheirs and assigns, and against the claim or claims of any other person whomsoever.
In Testimony Whereof, the said partyof the first part havehereunto settheirhandsand sealsthe day and year aforesaid.
Charles Dresser
seal Louisa W Dresser–
seal
[certification]
05/02/1844
Lavely, William
Signed Sealed and delivered In presence of
Wm Lavely3
[certification]
05/02/1844
Lavely, William
Before me, the undersigneda Justice of the peacefor the County aforesaid, personally cameCharles Dresser & Louisa W. his wifewhoareknown to me to be the real personsby whom and in whose namesthe above conveyance was executed, and by whom and in whose names the above conveyance was executed, and by whom and in whose namessaid conveyance is proposed to be acknowledged, and acknowledged that oftheirfree will, thattheyexecuted said deed for the purposes therein expressed. And the saidLouisa W Dresserwifeof the saidCharles Dresserbeing by me first examined separate and apart from hersaid husband4 and the contents of said conveyance being first made known to her,acknowledged thatshefreely and voluntarily and without any compulsion or coercion from hersaid husbandshe executed the same, and forever relinquish all herright and claim of Dower in and to the lands and tenements in said conveyance described.5
Given under my hand and seal, this2dday ofMayin the year of our Lord one thousand eight hundred and forty-four
Wm Lavely J. P.[Justice of the Peace]
seal
<Page 2>
[certification]
05/02/1844
Talbott, Benjamin
Recorders office City of Springfield May 2nd 1844
I, Benjamin Talbott recorder for said County do Certify that the within Deed of Conveyance is Recorded In my office in Book. V. pages 300 & 301–
Benjamin Talbott R.[Recorder] S. C.6
[docketing]
Talbott, Benjamin
[docketing]
05/02/1844
Talbott, Benjamin
Filed for Record at one Oclock P–M
May 2d 1844
Fee $1.00 paid8
1Abraham Lincoln filled in the blanks of this partially printed document. Charles and Louisa Dresser signed their own names. Another text, from the deed record book, was written by Benjamin Talbott.
2The lot described here contained the only home Lincoln ever owned. He and his family lived there until he was elected president and moved to Washington, DC, on February 11, 1861.
The Lincoln Log: A Daily Chronology of the Life of Abraham Lincoln, 11 February 1861, http://www.thelincolnlog.org/Results.aspx?type=CalendarDay&day=1861-02-11.
3Lavely signed his own name.
4Printed “husbond” changed to handwritten “husband”.
5“Dower” is a term that refers to the legally protected lifetime right of a woman to one-third of her husband’s lands and personal property. Dower was intended to provide for the support of a widow and her children. Because of this, a husband could not convey property without the consent of his wife.
Christopher A. Schnell, “Wives, Widows, and Will Makers: Woman and the Law of Property,” in In Tender Consideration: Women, Families, and the Law in Abraham Lincoln’s Illinois, ed. Daniel W. Stowell (Urbana: University of Illinois Press, 2003), 129, 133; Joan R. Gundersen, “Women and Inheritance in America,” in Inheritance and Wealth in America, ed. Robert K. Miller Jr. and Stephen J. McNamee (New York: Springer Science and Business Media, 1998), 94.
6Talbott wrote and signed this certification.
7Talbott wrote this docketing.
8Talbott wrote this docketing.