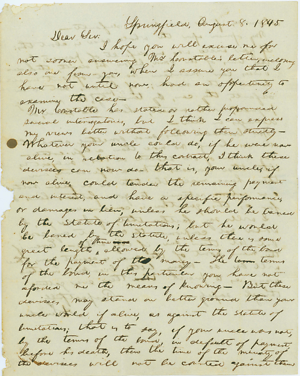 Abraham Lincoln to James McDowell, 8 August 18451
Springfield, August 8. 1845 Dear Sir:
I hope you will excuse me for not sooner answering Mr Constable's letter, inclosing also one from you, when I assure you that I have not until now, had an oppertunity to examine the case–2
Mr Constable has stated or rather propounded several interrogatories, but I think I can express my views better without following them strictly– Whatever your uncle could do, if he were now alive, in relation to this contract, I think these devisees can now do—that is, your uncle, if now alive, could tender the remaining payment and interest, and have a specific performance, or damages in lieu, unless he should be barred by the statute of limitations; but he would be barred by the statute, unless there is some great length ^of time [...?] [...?]^ allowed by the terms of the bond for the payment of the money– The term terms of the bond, in this particular you have not aforded me the means of knowing– But these devisees may stand on better ground than your uncle would, if alive, as against the statute of limitations; that is to say, if your uncle was not, by the terms of the bond, in default of payment, before his death, then the time of the minority of the devisees will not be counted against them
<Page 2>
otherwise, if he was so in default–3
My opinion upon the whole case is about this: If your uncle was in default of payment, by the terms of the bond, before his death, these devisees can maintain no sort of suit in relation to the matter; if he was not so in default, they can, by tendering ^or paying^ the remaining payment, with interest, have the land, or damages in lieu–
Mr Constable has said something about these devisees having no more than a life-estate– My view of our statute on this subject is, that these devisees take a life-estate, and their heirs male, the title in in fee—nothing ever return returning to your fathers heirs s[o] far as this question is concerned–4
I will say farther that, if I were you, I would not compromise the case at any cost; but let them sue if they will– Even if the main point of the case is against you, there will be so many little breaker's in their way, as to prevent there their ever getting through safely–5
RespectfullyA. Lincoln
<Page 3>
<Page 4>
[SPRI]NGFIE[LD]
AUG[August] 20J. McDowell Esqr[Esquire]Mount CarmelIllinois–
[endorsement]
5
[endorsement]
McDowell, James
And[Answered]6
[docketing]
A. Lincoln's Letter
1Abraham Lincoln wrote and signed this letter. He also wrote the address on the last sheet, which was folded to make an envelope.
2Neither Charles H. Constable’s nor James McDowell’s letters have been located, and there is no further record of Abraham Lincoln’s involvement in the case. Perhaps McDowell was handling a case involving the estate of Constable, his uncle, and was seeking the particular advice of Lincoln.
3Illinois law limited the time that a person could file suit in particular cases. In actions involving debts, for example, a person had to sue within five years of the contract coming due.
“An Act for the Limitation of Actions and for Avoiding Vexatious Law Suits,” 1 June 1827, Revised Laws of Illinois (1833), 441.
4The law that Lincoln referenced here may have been section six of an act regulating conveyances of real property. In that section, entails--the settling of estate property across generations--was forbidden.
“An Act concerning Conveyances of Real Property,” 31 January 1827, Revised Laws of Illinois (1827), 97.
5The resolution of McDowell’s case is unknown.
6James McDowell wrote the endorsement.