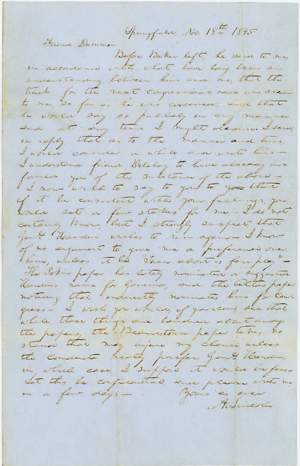 Abraham Lincoln to Henry E. Dummer, 18 November 18451
Springfield, Nov: 18th 1845 Friend Dummer:
Before Baker left, he said to me, in accordance with what had long been an understanding between him and me, that the track for the next congressional race was clear to me, so far as he was concerned; and that he would say so publicly in any manner, and at any time I might desire. I said, in reply, that as to the manner and time, I would consider a while, and write him– I understand friend Delahay to have already informed you of the substance of the above–
I now wish to say to you to you that if it be consistent with your feelings, you would set a few stakes for me– I do not certainly know, but I strongly suspect, that Genl Hardin wishes to run again– I know of no argument to give me a preference over him, unless it be "Turn about is fair play"–2
The Pekin paper has lately nominated or suggested Hardin's name for Governor, and the Alton paper, noticing that, indirectly nominates him for Congress–3
I wish you would, if you can, see that, while these things are bandied about among the papers, the Beardstown paper takes no stand that may injure my chance, unless the conductor really prefers Genl Hardin, in which case, I suppose it would be fair–
Let this be confidential, and please write me in a few days–4
Yours as everA. Lincoln
<Page 2>
SPRINGFIELD Ill.[Illinois]
NOV[November] 19
PAID
PAID
H. E. Dummer Esqr[Esquire]BeardstownIllinois
1Abraham Lincoln wrote and signed the letter. He also authored the address on the back page, which was folded to create an envelope for mailing.
2At a Whig convention in Pekin in May 1843, an agreement was made between Lincoln, Edward D. Baker, and John J. Hardin that seemed to establish a one-term limit on the prospective Whig congressmen. Hardin and Baker having already served, Lincoln believed that the 1846 nomination should have been his. In September 1845, Lincoln inquired of Hardin’s plans, but Hardin would not answer definitively one way or the other.
Michael Burlingame, Abraham Lincoln: A Life (Baltimore: The Johns Hopkins University Press, 2008), 2:218, 231.
3The Pekin paper that Lincoln references has not been identified.
Lincoln was mistaken on this point. Benjamin F. James’ newspaper, the Tazewell Whig, proclaimed Hardin for governor in at least three November issues. On November 15, the Alton Telegraph and Democratic Review noted that the James’s paper had put forth Hardin’s name for governor. It implied first-hand knowledge that Hardin would not run for governor, and posited that while no Whig could win statewide office, the congressional race would be an opportunity with a greater chance of success.
The Tazewell Whig (Tremont, IL), 1 November 1845, 2:1; 8 November 1845, 2:1; 15 November 1845, 2:1; Alton Telegraph and Democratic Review (IL), 15 November 1845, 2:3.
4Dummer’s response to Lincoln, if any, has not been located.