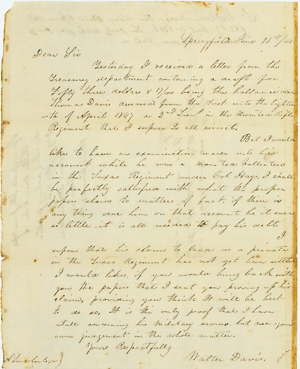 Walter Davis to Abraham Lincoln, 16 June 18481
Springfield June 16th/48Dear Sir
Yesterday I received a letter from the Treasurey department containing a draft for Fifty three dollars & 87/100 being the ballance due Thomas Davis deseased, from the First unto the Eighteenth of April 1847 as 2nd Lieut[Lieutenant] in the Mounted Rifle Regiment, that I supose Is all correct.
But I would like to have an examination made into his account while he was a mounted vollunteer in the Texas Regiment under Col Hays, I shall be perfectly sattisfied with what the proper papers shows to matters of fact, if there is any thing due him on that account be it ever so little, it is all needed to pay his debts2
I supose that his claim to land as a private in the Texas Regiment has not yet been settledI would like if you would bring back with you the papers that I sent you proving up his claim, providing you think It will be best to do so. It is the only proof that I have at all concerning his milatary sevices, but use your own judgement in the whole matter.
Yours RespectfullyWalter Davis,A Lincoln Esqr[Esquire]
[docketing]
over
<Page 2>
[docketing]
Springfield, Ills.[Illinois] June 16/48[1848]
Walter Davis to Hon A, Lincoln; asking further pay in the case of Thomas Davis, decd[deceased] Texas vols[volunteers],
Rec'd[Received] June 27, 1848.
[endorsement]
Abraham LincolnMcCalla, John M.
Gen: McCalla will see the object of the within letter– Will he please attend to it and notify me?
A. Lincoln
[endorsement]
Lt William Davis–3 This claim Paid 6 June 1848 $53.87 Cert No 5716, The party ask for pay as a Texan vol–[volunteers]
[docketing]
Mr Farquher4
1Walter Davis wrote and signed the letter. Abraham Lincoln wrote and signed the endorsement. Lincoln responded to Davis on June 26.
2The 1st regiment of Texas Mounted Rifle Volunteers under Colonel John C. Hays served from June to October 1846.
Wm. Hugh Robarts, Mexican War Veterans: A Complete Roster of the Regular and Volunteer Troops in the War Between the United States and Mexico, from 1846 to 1848 (Washington, DC: Brentano's, 1887), 74.
3The author of this endorsement probably meant Thomas Davis.
4Mr. Farquher could not be positively identified.