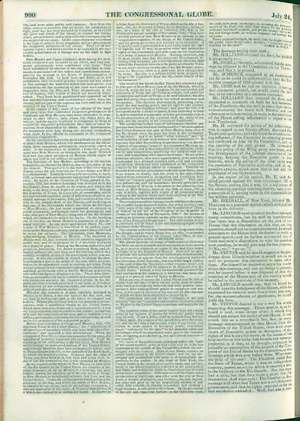 Report of Legislative Proceedings regarding James K. Polk’s Message on New Mexico and California, 24 July 18481
Mr. LINCOLN next obtained the floor amongst many competitors, but he said he apprehended that there was a disposition on the part of the House that the discussion at this time, on this question, should not be longer protracted; he would announce to the House that he desired to make a general speech, and he further announced that if there was now a disposition to take the question now pending, he would give way for that purpose. (“No, no;” “go on.”)
Mr. VINTON said he would suggest to the gentleman from Illinois whether it would not be as well to postpone this discussion to some other time. For himself he desired to say a few words about this message, and not on things in general; and he trusted before it was disposed of, that the attention of the House and of the country would be called to the positions of this message.
Mr. LINCOLN would say, that he hoped he should have the indulgence of the House, while he expressed his views at some future time; and now, for the accommodation of gentlemen, he would yield the floor.2
1James K. Polk’s message came in response to resolutions introduced in the House of Representatives by Alexander H. Stephens on July 10 which called on the president, among other things, to inform the body whether or not civil government had been established in New Mexico and California.
U.S. House Journal. 1848. 30th Cong., 1st sess., 1009-12, 1096-1102; Cong. Globe, 30th Cong., 1st Sess., 910-16, 989-90 (1848).
2After considerable debate, during which Abraham Lincoln did not speak, the House agreed to postpone consideration of Polk’s message until July 27 and to make this message and Polk’s message of July 6 relative to the ratification of the Treaty of Guadalupe-Hidalgo the special order of the day for that date.
U.S. House Journal. 1848. 30th Cong., 1st sess., 1102-3; Cong. Globe, 30th Cong., 1st Sess., 990-92 (1848).