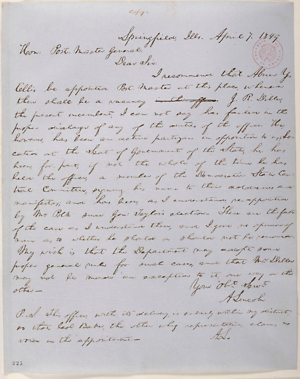 Abraham Lincoln to Jacob Collamer, 7 April 18491
copy–
Springfield, Ills– April 7, 1849Hon: Post-Master–General:Dear Sir:
I recommend that Abner Y. Ellis be appointed Post-Master at this place, whenever there shall be a vacancy in the office– J. R. Diller, the present incumbent, I can not say has failed in the proper discharge of any of the duties of the office. He, however, has been an active partizan in opposition to us;– Located at the Seat of Government of the State, he has been, for part, if not the whole of the time he has held the office, a member of the Democratic State Central Committee, signing his name to their addresses and manifestos; and has been, as I understand, re-appointed by Mr Polk since Gen: Taylor's election– These are the facts of the case as I understand them, and I give no opinion of mine as to whether he should or should not be removed–
My wish is that the Department may adopt some proper general rule for such cases, and that Mr Diller may not be made an exception to it, one way or the other–
Your Obt Servt[Obedient Servant]A LincolnP. S. This office, with it's delivery, is entirely within my district; so that Col Baker, the other whig representative, claims no voice in the appointment–A. L.2
1Abraham Lincoln wrote and signed the letter and the postscript. This is the retained copy of the letter sent to Jacob Collamer. The copy of the letter sent to Collamer has not been located.
2Lincoln had represented the Seventh Congressional District, which included Sangamon County and Springfield. He had pledged to serve only one term, but many Whigs in the district favored his renomination. Lincoln was not averse to running again, but Stephen T. Logan received the nomination. In August 1848, Logan would lose to Thomas L. Harris in a close race. In the August election, Edward D. Baker had won election in the Sixth Congressional District.
Caleb Birchall, Abner Y. Ellis, and Walter Davis were candidates to replace Jonathan R. Diller as postmaster of Springfield. Ellis replaced Diller and held the position until 1853.
Michael Burlingame, Abraham Lincoln: A Life (Baltimore: Johns Hopkins University Press, 2008), 1:271; Howard W. Allen and Vincent A. Lacey, eds., Illinois Elections, 1818-1990 (Carbondale and Edwardsville: Southern Illinois University Press, 1992), 8, 126; John W. Smith to Abraham Lincoln; Register of all Officers and Agents, Civil, Military, and Naval, in the Service of the United States, on the Thirtieth September, 1849 (Washington, DC: Gideon, 1849), *489; Edward Tremayne, Tremayne’s Table of the Post-Offices in the United States (New York: W. F. Burgess, 1850), 41; Table of Post Offices in the United States on the First Day of January, 1851 (Washington, DC: W. & J. C. Greer, 1851), 261; Register of Officers and Agents, Civil, Military, and Naval, in the Service of the United States, on the Thirtieth September, 1853 (Washington, DC: Robert Armstrong, 1853), 518*.