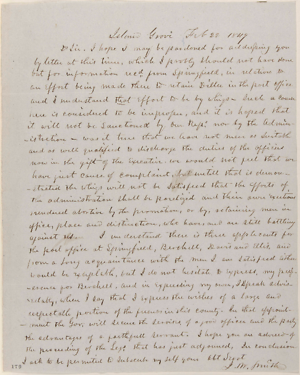 John W. Smith to Abraham Lincoln, 22 February 18491
Island Grove Feb 22 1849Dr[Dear] Sir,
I hope I may be pardoned for addressing you by letter at this time, which I probly should not have done but for information recd[received] from Springfield, in relation to an effort being made there to retain Diller in the post office and I understand that effort to be by whigs—such a course here is considered to be improper, and it is hoped that it will not be sanctioned by our Reps[Representatives] nor by the Administration—was it true that we have not men as suitable and as well qualified to discharge the duties of the offices now in the gift of the Executive, we would not feel that we have just cause of complaint, but untill that is demonstrated the whigs will not be satisfied that the efforts of the administration shall be parelized and their own exertions rendered abortive by the promotion, or by, retaining men in office, place and distinction, who have, and are still battling against us. I understand there is three applicants for the post office at Springfield, Berchell, Davis and Ellis, and from a long acquaintance with the men I am satisfied either would be exceptable, but I do not hesitate to express, my preference for Berchell, and in expressing my own, I speak advisedably, when I say that I express the wishes of a large and respectable portion of the friends in this county. In that appointment the Gov.[Government] will secure the services, of a good officer and the party the advantages of a faithfull servant. I hope you are advised of the proceeding of the Legs that has just adjourned, In conclusion I ask to be permited to subscribe my self2
your Obt Servt[obedient Servant]J. W. Smith
1John W. Smith wrote this letter in its entirety.
2Abner Y. Ellis replaced Jonathan R. Diller and held the position until 1853.
Register of all Officers and Agents, Civil, Military, and Naval, in the Service of the United States, on the Thirtieth September, 1849 (Washington, DC: Gideon, 1849), 489; Edward Tremayne, Tremayne’s Table of the Post-Offices in the United States (New York: W. F. Burgess, 1850), 41; Table of Post Offices in the United States on the First Day of January, 1851 (Washington, DC: W. & J. C. Greer, 1851), 261; Register of Officers and Agents, Civil, Military, and Naval, in the Service of the United States, on the Thirtieth September, 1853 (Washington, DC: Robert Armstrong, 1853), 518.