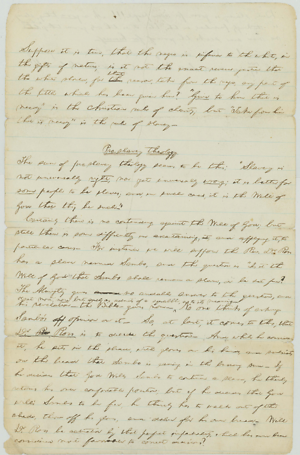 Fragment of Notes on Pro-slavery Theology, [May 1857 - October 1858]1
Suppose it is true, that the negro is inferior to the white, in the gifts of nature; is it not the exact reverse justice that the white should, for this ^that^ reason, take from the negro, any part of the little which has been given him? "Give to him that is needy" is the christian rule of charity; but "Take from him that is needy" is the rule of slavery–
Pro-slavery Theology.
The sum of pro-slavery theology seems to be this: "Slavery is not universally right, nor yet universally wrong; it is better for some people to be slaves; and, in such cases, it is the Will of God that they be such–"
Certainly there is no contending against the Will of God; but still there is some difficulty in ascertaining, it, and applying it, to particular cases– For instance we will suppose the Rev. Dr Ross has a slave named Sambo, and the question is "Is it the Will of God that Sambo shall remain a slave, or be set free?2 The Almighty gives [...?] no audable answer to the question, and his revelation— the Bible— gives none— ^or, at most, none but such as admits of a squabble, as to it's meaning–^ No one thinks of asking Sambo's opp opinion on it– So, at last, it comes to this; that Dr Rev Ross is to decide the question– And while he considers it, he sits in the shade, with gloves on his hands, and subsists on the bread that Sambo is earning in the burning sun– If he decides that God Wills Sambo to continue a slave, he thereby retains his own comfortable position; but if he decides that God Will's Sambo to be free, he thereby has to walk out of the shade, throw off his gloves, and delve for his own bread– Will Dr Ross be actuated by that perfect impartiality, which has ever been considered most favorable to correct decisions?
<Page 2>
But, slavery is good for some people!!! As a good thing, slavery is strikingly perculiar, in this, that it is the only good thing that ^which^ no man ever seeks the good of, for himself–
Nonsense! Wolves devouring lambs, not because it is good for their ^own^ greedy maws, but because it good for the lambs!!!
1Abraham Lincoln wrote this fragment.
The actual date of this fragment is unknown. Scholars agree that Lincoln penned this in response to Frederick A. Ross, a pro-slavery clergyman and theologian who published Slavery Ordained of God in 1857. John G. Nicolay and John M. Hay assigned it the date October 1, 1858, and included it among a number of fragments and notes for speeches that Lincoln delivered during the 1858 senatorial campaign against Stephen A. Douglas. Roy P. Basler, editor of The Collected Works of Abraham Lincoln, retained this date in the absence of any evidence to the contrary. Rufus Rockwell Wilson insisted that Lincoln read Slavery Ordained of God, and used Ross’ views of the divine will to compose material for use during the Lincoln-Douglas Debates. Modern scholars doubt whether Lincoln actually read the book but agree that Ross’ views had some impact on Lincoln’s thought. Ross published Slavery Ordained of God in May 1857, so the editors believe that Lincoln penned this sometime between May 1857 and October 1858.
Fred. A. Ross, Slavery Ordained of God (Philadelphia: J. P. Lippincott, 1857); John G. Nicolay and John Hay, eds., Complete Works of Abraham Lincoln, new and enlarged ed. (New York: Francis D. Tandy, 1905), 4:201-2; Roy P. Basler, ed., The Collected Works of Abraham Lincoln (New Brunswick, NJ: Rutgers University Press, 1953), 3:204-5; Rufus Rockwell Wilson, What Lincoln Read (Washington, DC: Pioneer, 1932), 61-62; Robert Bray, “What Abraham Lincoln Read: An Evaluative and Annotated List,” Journal of the Abraham Lincoln Association 28 (Summer 2007), 72; Robert Bray, Reading With Lincoln (Carbondale and Edwardsville: Southern Illinois University Press, 2010); Michael Burlingame, Abraham Lincoln: A Life (Baltimore: The Johns Hopkins University Press, 2008), 1:475-76.
2Borrowed from the Spanish word zambo, meaning bandy-legged, monkey, or mixed blood, Sambo had two meanings in Lincoln’s time. It was a pejorative nickname for African Americans, referencing the subservient manner or attitude thought typical for Black enslaved people, and it was also used to describe persons of mixed race, particularly those with one Black and one Native American parent, or those with one parent with African and one with European ancestry.
Lesley Brown, ed., The New Shorter Oxford English Dictionary on Historical Principles (Oxford: Clarendon, 1993), 2:2677-78.