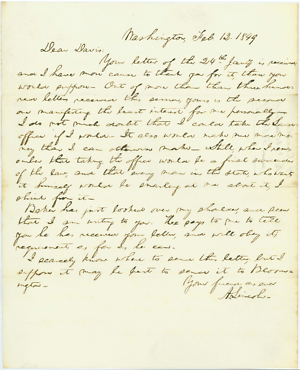 Abraham Lincoln to David Davis, 12 February 18491
Washington, Feb. 12. 1849Dear Davis:
Your letter or the 24th Jany[January] is received; and I have more cause to thank you for it, than you would suppose–2 Out of more than than three hundred letters received this session, yours is the second one manifesting the least interest for me personally– I do not much doubt that I could take the Land office if I would– It also would make me more money than I can otherwise make– Still, when I remember that taking the office would be a final surrender of the law, and that every man in the state, who wants it himself, would be snarling at me about it, I shrink from it–3
Baker has just looked over my shoulder, and seen that I am writing to you. He says to me to tell you he has received your letter, and will obey it's requirements as far as he can.
I scarcely know where to send this letter; but I suppose it may be best to send it to Bloomington–
Your friend as everA. Lincoln–
<Page 2>
[docketing]
A Lincoln
Recd[Received] no answer
Jan Febry[February] 49[1849]4
1Lincoln wrote the body of the letter in its entirety.
2Davis’ letter of January 24, 1849, has not been located, but his reply to Lincoln’s letter apparently offered advice in the same vein as on January 24: Lincoln should pursue and take the position of commissioner of the U.S. General Land Office.
3Despite his misgivings expressed here and elsewhere, Lincoln would become embroiled in the General Land Office Affair, a hotly contested race in the spring and summer of 1849 to become commissioner of the U.S. General Land Office.
Abraham Lincoln to Joshua F. Speed.
4Davis responded on February 21, 1849.