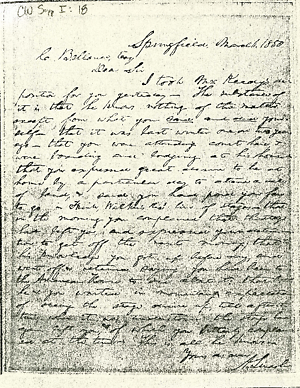 Abraham Lincoln to Charles Ballance, 6 March 18501
Springfield, March 6. 1850C. Ballance, Esq[Esquire]Dear Sir
I took Mr Keedy's deposition for you yesterday– The substance of it is that he knows nothing of the matter except from what you said and did yourself— that it was last winter one or two years ago— that you were attending court here, & were boarding and lodging at his house— that you expressed great desire to be at home by a particular day to attend a sale of land, &. said you had paid your fare to go in Frink, Walker's & Cos line of stages— that in the morning you complained that the stage had left you, and expressed your determination to get off the next morning; that, to his knowledge you got up before day, and went off & returned saying you had been to the American House to see about it; that both he & you waited in momentary expectation of seeing the stage drive up, till after the time, when it was understood the stage had again left you, of which you bitterly complained at the time– This is all he knows–2
Yours as everA. Lincoln
1Abraham Lincoln wrote and signed this letter. The original letter in Lincoln’s hand has not been located.
2Charles Ballance may have been considering legal action against Frink, Walker & Company, but ultimately, he filed no suit.
Lincoln took deposition for Ballance, Martha L. Benner and Cullom Davis et al., eds., The Law Practice of Abraham Lincoln: Complete Documentary Edition, 2d edition (Springfield: Illinois Historic Preservation Agency, 2009), http://www.lawpracticeofabrahamlincoln.org/Details.aspx?case=141583.