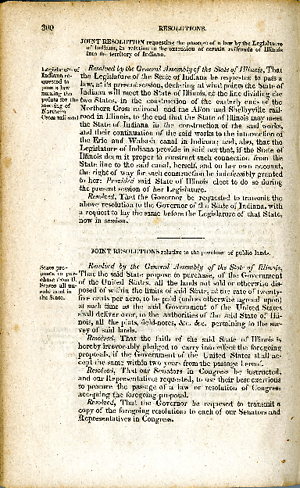 Publication:
Journal of the House of Representatives of the Eleventh General Assembly of the State of Illinois at their First Session (Vandalia, IL: William Walters, 1838), 225.

JOINT RESOLUTIONS relative to the purchase of public lands.
State proposes to purchase from U. States all unsold land in the State.
Resolved by the General Assembly of the State of Illinois, That the said State propose to purchase, of the Government of the United States, all the lands not sold or otherwise disposed of within the limits of said State, at the rate of twenty-five cents per acre, to be paid (unless otherwise agreed upon) at such time as the said Government of the United States shall deliver over, to the authorities of the said State of Illinois, all the plats, field-notes, &c.[etc.] &c. pertaining to the survey of said lands.
Resolved, That the faith of the said State of Illinois is hereby irrevocably pledged to carry into effect the foregoing proposals, if the Government of the United States shall accept the same within two years from the passage hereof.
Resolved, That our Senators in Congress be instructed, and our Representatives requested, to use their best exertions to procure the passage of a law or resolution of Congress accepting the foregoing proposal.
Resolved, That the Governor be requested to transmit a copy of the foregoing resolutions to each of our Senators and Representatives in Congress.1
1