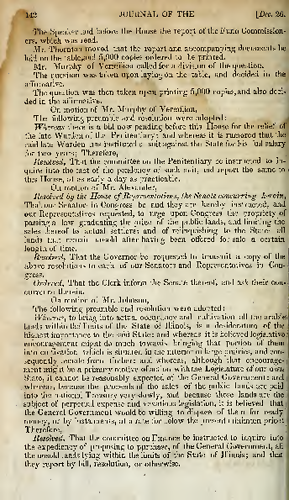 1
Whereas, to bring into actual occupancy and cultivation all the arable lands within the limits of the State of Illinois, is a desideratum of the highest importance to the said State: and whereas it is believed legislative encouragement might do much towards bringing that portion of them into cultivation which is situated in the interior of large prairies, and consequently remote from timber: and whereas, although that encouragement might be a primary motive of action with the Legislature of our own State, it cannot be reasonably expected of the General Government: and whereas, because the proceeds of the sales of the public lands are paid into the national Treasury very slowly, and because those lands are the subject of perpetual expense and vexatious legislation, it is believed that the General Government would be willing to dispose of them for ready money, or by instalments, at a rate for below the present minimum price:
Therefore
Resolved, That the committee on Finance be instructed to inquire into the expediency of proposing to purchase, of the General Government, all the unsold lands lying within the limits of the State of Illinois; and that they report by bill, resolution, or otherwise.2
1On December 26, 1838, Benjamin Johnson introduced the resolution in the House of Representatives, and the House adopted it. On January 1, 1839, Jonas Rawalt of the Committee of Finance, of which Abraham Lincoln was a member, reported back the resolution, asking that the committee be discharged from further consideration, in which the House concurred. Later that day, Lincoln moved that the House reconsider this vote, and the House concurred. The House subsequently refused to discharge the committee from further consideration. On January 17, Lincoln, speaking on behalf of the committee, reported back the resolution with a lengthy report, together with a set of resolutions.
Illinois House Journal. 1838. 11th G. A., 1st sess., 142, 151, 152, 223.
2Joining Abraham Lincoln on the Committee on Finance were Archibald Williams, Henry L. Webb, Jesse W. Gouge, Isaac P. Walker, Jonas Rawalt, William Campher (Compher), , and Wyatt B. Stapp.
Illinois House Journal. 1838. 11th G. A., 1st sess., 31.


Printed Transcription, 1 page(s), Journal of the House of Representatives of the Eleventh General Assembly of the State of Illinois at their First Session (Vandalia, IL: William Walters, 1838), 142

Resolution regarding the Purchase of Unsold Lands in the State of Illinois. [1838-12-26]. /documents/D302087. The Papers of Abraham Lincoln Digital Library.