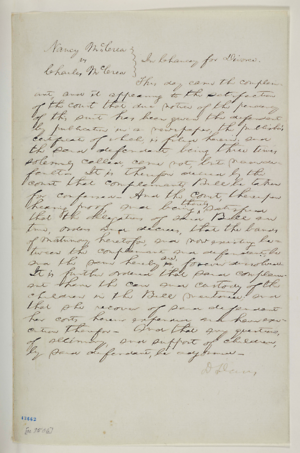 Decree in McCrea v. McCrea, 21 March 18561
This day came the complainant,, and it appearing to the satisfaction of the court that due notice of the pendency of this suit has been given the defendant by publication in a newspaper,3 the publisher’s certificate of which, is filed herein, and the said defendant, being three times solemnly called, came not, but made default– It is therefore decreed by the court that complainants’ Bill be taken for confessed– And the court, thereupon hearing proof, and being ^thereby^ satisfied that the allegations of said Bill are true, orders and decrees, that the bands of matrimony heretofore, and now existing between the complainant and defendant, be and the same hereby is, ^are,^ forever dissolved– It is further ordered that said complainant have the care and custody of the children in the Bill mentioned; and that she recover of said defendant her costs herein expended and have execution therefor– And that any questions, of allimony, and support of children, by said defendant, be adjourned–
D Davis
<Page 2>
[docketing]
Lincoln, Abraham (President)
1Abraham Lincoln wrote the text of this document. David Davis signed his own name.
2Charles McCrea and Nancy McClelland married in April 1846 in Sangamon County, Illinois. In March 1856, Nancy retained Lincoln & Herndon and sued Charles for divorce in the Sangamon County Circuit Court, citing his desertion of her and their two children, James and Mary, in 1849. Charles had gone to California in April 1849, apparently to mine for gold. Legislation governing divorces, enacted by the Illinois General Assembly in January 1827, gave circuit courts jurisdiction over divorce suits.
Illinois Statewide Marriage Index, Sangamon County, 10 April 1846, Illinois State Archives, Springfield, IL; U.S. Census Office, Eighth Census of the United States (1860), Petersburg, Menard County, IL, 215; Bill for Divorce, Affidavit, Document ID: 76555, McCrea v. McCrea, Martha L. Benner and Cullom Davis et al., eds., The Law Practice of Abraham Lincoln: Complete Documentary Edition, 2d edition (Springfield: Illinois Historic Preservation Agency, 2009), http://www.lawpracticeofabrahamlincoln.org/Details.aspx?case=139949; “An Act Concerning Divorces,” 31 January 1827, Revised Laws of Illinois (1827), 181-83.
3An announcement appeared in nine issues of the Illinois State Journal in January and February 1856 calling Charles McCrea to appear at the Sangamon County Circuit Court on the third Monday of March (March 17) 1856 to “plead, answer, or demur” to the divorce bill. Charles failed to appear for the court date and Judge Davis granted Nancy a divorce and custody of the children. Charles McCrea was last heard from in 1855, and his friends believed he had been murdered for his money as he prepared to return from California to Illinois.
Daily Illinois State Journal (Springfield), 10 January 1856, 2:5; 11 January 1856, 2:5; 12 January 1856, 3:5; 18 January 1856, 3:6; 19 January 1856, 3:6; The Illinois State Journal (Springfield), 23 January 1856, 3:7; 30 January 1856, 4:4; 6 February 1856, 4:4; 13 February 1856, 4:4; John Carroll Power and S. A. Power, History of the Early Settlers of Sangamon County, Illinois (Springfield, IL: Edwin A. Wilson, 1876), 493-94.
4Lincoln wrote this docketing.