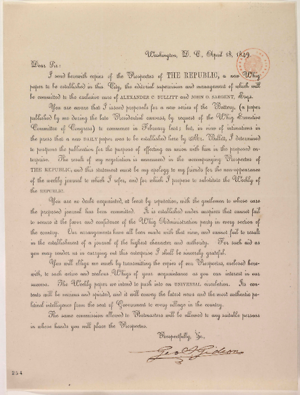 George S. Gideon to Abraham Lincoln, 18 April 18481
Washington, D.C., April 18, 1849.Dear Sir:
I send herewith copies of the Prospectus of THE REPUBLIC, a new Whig paper to be established in this City, the editorial supervision and management of which will be committed to the exclusive care of ALEXANDER C. BULLITT and JOHN O. SARGENT, Esqs[Esquire].2
You are aware that I issued proposals for a new series of the Battery, (a paper published by me during the late Presidential canvass, by request of the Whig Executive Committee of Congress) to commence in February last; but, in view of intimations in the press that a new DAILY paper was to be established here by Mr. Bullitt, I determined to postpone the publication for the purpose of effecting an union with him in the proposed enterprise. The result of my negotiation is announced in the accompanying Prospectus of THE REPUBLIC, and this statement must be my apology to my friends for the non-appearance of the weekly journal to which I refer, and for which I propose to substitute the Weekly of the REPUBLIC.
You are no doubt acquainted, at least by reputation, with the gentlemen to whose care the proposed journal has been committed. It is established under auspices that cannot fail to secure it the favor and confidence of the Whig Administration party in every section of the country. Our arrangements have all been made with that view, and cannot fail to result in the establishment of a journal of the highest character and authority. For such aid as you may render us in carrying out this enterprise I shall be sincerely grateful.
You will oblige me much by transmitting the copies of our Prospectus, enclosed herewith, to such active and zealous Whigs of your acquaintance as you can interest in our success. The Weekly paper we intend to push into an UNIVERSAL circulation. Its contents will be various and spirited, and it will convey the latest news and the most authentic political intelligence from the seat of Government to every village in the country.
The same commission allowed to Postmasters will be allowed to any suitable persons in whose hands you will place the Prospectus.
Respectfully, &c.[etc],Geo. S. Gideon
1George S. Gideon signed this form letter.
2Copies of the prospectus were not with the letter and have not been located.