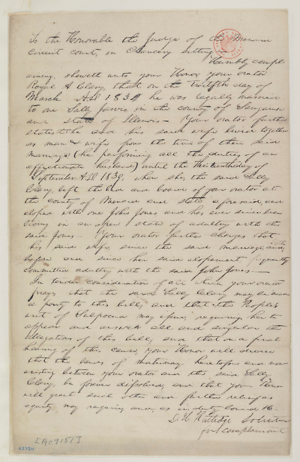 Bill for Divorce in Clary v. Clary, 13 November 18391
To the Honorable the Judge of the Menard circuit court, in Chancery sitting—2
Humbly complaining, sheweth unto your Honor, your orator Royal A. Clary, that on the twelfth day of March A.D 1834 he was legally married to one Sally Jarvis, in the county of Sangamon and state of Illinois— Your orator further states that he and his said wife lived together as man & wife from the time of their said marriage; (he performing all the duties of an affectionate husband) until the this tenth day of September A.D. 1839, when she, the said Sally Clary, left the bed and board of your orator at the county of Menard and state aforesaid, and eloped with one John Jones, and has ever since been living in an open state of adultry with the said Jones— Your orator further charges that his said wife, since the said marriage, and ^both^ before and since her said elopement, frequently committed adultry with the said John Jones—3
In tender consideration of all which your orator prays that the said Sally Clary may be made a party to this bill; and that the People’s writ of Subpoena may issue, requiring her to appear and answer all and singular the allegations of this bill; and that on a final hearing of this cause, your Honor will decree that the bonds of matrimony heretofore and now existing between your orator and the said Sally Clary, be forever dissolved; and that your Honor will grant such other and further relief as equity may require, and, as in duty bound &c[etc]–
D. H. Rutledge Solicitor
for complainant4
<Page 2>
[endorsement]
[11]/[13]/[1839]
Clary, Royal A.
Affidavit of Royal A. Clary
Royal A. Clary, who is about to commence a suit in Chancery in the Circuit court of the county aforesaid, against Sally Clary, being first duly sworn, states on oath that he is informed and verily believes, that the said Sally Clary has gone out of this state–
R. A. Clary
[certification]
11/13/1839
Dresser, Nathan
Subscribed and sworn to before me this 13th day of November A.D. 1839
Nathan Dresser Clerk
<Page 3>
[docketing]