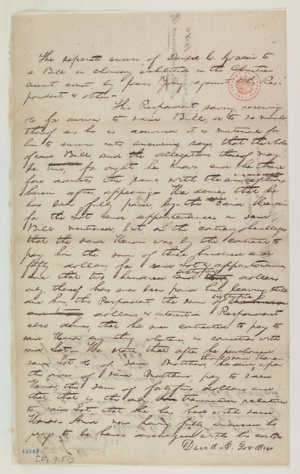 Separate Answer of David C. Goodan in Young v. Hanon et al., [1 June 1846]1
The separate answer of David C. Goodin to a Bill in chancery exhibited in the Christian circuit court, by James Young against this Respondent & others–2
This Respondent, saving, reserving &c.[etc.] for answer to said Bill, or to so much thereof as he is advised it is material for him to answer unto, answering, says, that the whole of said Bill, and the allegations thereof may be true, for ought he knows; and he there fore admits the same, with the exceptions herein after, appearing– He denies that he has been fully paid, by the said Hardin for the Lot and appurtenances, in said Bill mentioned; but, on the contrary, he alleges that the said Hardin was, by the contract to pay him the sum of three hundred and fifty dollars, for said Lot & appurtenances, and that two hundred and thirty ^sixtyfive ^ dollars only, thereof has ever been paid him leaving still due him, this Respondent, the sum of one hundred and twenty ^eightyfive ^ dollars, & interest– Respondent also denies, that he ever contracted to pay to said Hanon any thing whatever, in connection with said Lot– He states that after he purchased said Lot &c. of said Matthews, he did ^through said Hardin ^ upon the order of said Matthews; pay to said Hanon, the sum of fortyfive dollars; and that that is the only trans transaction relative to said Lot, that he has had with said Hanon– And now having fully answered, he prays to be hence discharged with his costs–3
David C. Goodan
<Page 2>
[certification]
Goodan, David C.
David C. Goodan, being first duly sworn states on oath, that the within answer, by him subscribed is true in substance and in fact–
David. C. Goodan
[certification]
06/01/1846
Vandeveer, Horatio M.
Subscribed and sworn to before me this 1st day of June A.D. 1846.
H. M. Vandeveer Clk[Clerk]
[docketing]
Lincoln, Abraham (President)
[docketing]
Vandeveer, Horatio M.
Filed
[docketing]
06/01/1846
Vandeveer, Horatio M.
Filed June 1. 1846
H. M. Vandeveer Ck[Clerk]
1Abraham Lincoln wrote the body of the document as well as the certifications signed by David C. Goodan and Horatio M. Vandeveer on page two. Goodan and Vandeveer signed their own names. Lincoln wrote the first docketing, and Vandeveer the last two.
2In 1844, James Young purchased land in Christian County, Illinois, from Henry Hardin, but Hardin did not have clear title to the land. Young sued Hardin, his partner David C. Goodan, and the previous owner Martin Hanon, to obtain title to the land. Abraham Lincoln and William H. Herndon represented the defendants in the case.
Young v. Hanon et al., Martha L. Benner and Cullom Davis et al., eds., The Law Practice of Abraham Lincoln: Complete Documentary Edition, 2d edition (Springfield: Illinois Historic Preservation Agency, 2009), http://www.lawpracticeofabrahamlincoln.org/Details.aspx?case=136934.
3The court ordered the land in question be conveyed to James Young. Hanon and Goodan were ordered to each pay one-third of the court costs.
Decree (Document ID: 52196), 7 June 1847, Young v. Hanon et al., Martha L. Benner and Cullom Davis et al., eds., The Law Practice of Abraham Lincoln: Complete Documentary Edition, http://www.lawpracticeofabrahamlincoln.org/Details.aspx?case=136934.