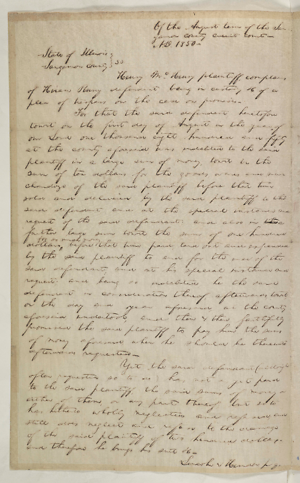 Declaration and Praecipe in McHenry v. Penny, 13 August 18501
Of the August term of the Sangamon county circuit court– A.D. 1850–
Henry McHenry plaintiff, complains of Hiram Penny defendant, being in custody &c[etc.] of a plea of trespass on the case on promises–
For that the said defendant, heretofore towit, on the first day of August in the year of our Lord one thousand eight hundred and fifty at the county aforesaid, was indebted to the said plaintiff in a large sum of money, towit in the sum of ten dollars for the goods, wares and merchandize of the said plaintiff before that time sold and delivered by the said plaintiff to the said defendant, and at the special instance and request of the said defendant; and also in the a further large sum, towit the sum of one hundred dollars ^for so much money^ before that time paid, laid out and expended by the said plaintiff to and for the use of the said defendant, and at his special instance and request; and being so indebted, he, the said defendant in consideration thereof, afterwards, towit, on the day and year aforesaid, at the county aforesaid, undertook, and then & there faithfully promised the said plaintiff to pay him the sums of money aforesaid, when he should be thereunto afterwards requested–
Yet the said defendant (although often requested so to do) has not as yet paid to the said plaintiff, the said sums of money or either of them, or any part thereof; but so to has hitherto wholly neglected and refused; and still does neglect and refuse, to the damage of the said plaintiff of two hundred dollars and therefore he brings his suit&c–
Lincoln & Herndon p q[pro querente]2
<Page 2>
[enclosure]
Lincoln, Abraham
[...?] Copy of account sued on–
Hiram Penny
3
[endorsement]
Lincoln, Abraham
Praecipe in McHenry v. Penny
Let a summons issue in the above entitled cause.
Lincoln & Herndon p q4
<Page 3>
[docketing]
83,
61,
5,
11.
32,
[docketing]
Lincoln, Abraham
[certification]
08/13/1850
Talbott, Benjamin
Filed Aug 13th 1850
B. Talbott ck[clerk] 5
1Abraham Lincoln wrote this declaration and signed it on behalf of Lincoln & Herndon.
2Meaning “for the plaintiff”; usually abbreviated pro quer.
Henry McHenry sued Hiram Penny in an action of assumpsit to recover the debt. McHenry dismissed the case in March 1852.
Henry Campbell Black, Black’s Law Dictionary, 6th ed. (St. Paul, MN: West, 1990), 1220; For documents related to this case, see McHenry v. Penny, Martha L. Benner and Cullom Davis et al., eds., The Law Practice of Abraham Lincoln: Complete Documentary Edition, 2d edition (Springfield: Illinois Historic Preservation Agency, 2009), http://www.lawpracticeofabrahamlincoln.org/Details.aspx?case=139562.
3Lincoln wrote this account.
4Lincoln wrote this praecipe and signed it on behalf of Lincoln & Herndon. A praecipe is a document from an attorney or a plaintiff instructing the clerk of the court to produce a writ as specified in the instructions.
Henry Campbell Black, Black’s Law Dictionary, 1172; “Praecipe,” Glossary, Martha L. Benner and Cullom Davis et al., eds., The Law Practice of Abraham Lincoln: Complete Documentary Edition, http://www.lawpracticeofabrahamlincoln.org/Reference.aspx?ref=Reference%20html%20files/Glossary.html.
5Benjamin Talbott wrote and signed this certification.