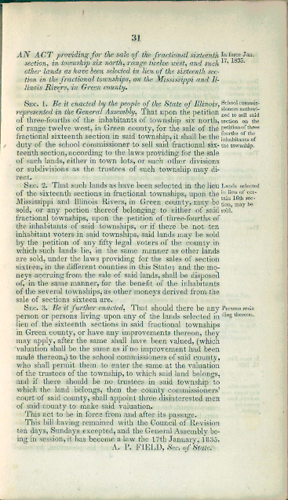 In force Jan.[January] 17, 1835.
AN ACT providing for the sale of the fractional sixteenth section, in township six north, range twelve west, and such other lands as have been selected in lieu of the sixteenth section in the fractional townships, on the Mississippi and Illinois Rivers, in Green county.
1
School commissioners authorized to sell said section on the petition of three fourths of the inhabitants of the township.
Sec.[Section] 1. Be it enacted by the people of the State of Illinois, represented in the General Assembly, That upon the petition of three-fourths of the inhabitants of township six north, of range twelve west, in Green county, for the sale of the fractional sixteenth section in said township,2 it shall be the duty of the school commissioner to sell said fractional sixteenth section, according to the laws providing for the sale of such lands, either in town lots, or such other divisions or subdivisions as the trustees of such township may direct.
Lands selected in lieu of certain 16th section, may be sold.
Sec. 2. That such lands as have been selected in the lieu of the sixteenth sections in fractional townships, upon the Mississippi and Illinois Rivers, in Green county, may be sold, or any portion thereof belonging to either of said fractional townships, upon the petition of three-fourths of the inhabitants of said townships, or if there be not ten inhabitant voters in said townships, said lands may be sold by the petition of any fifty legal voters of the county in which such lands lie, in the same manner as other lands are sold, under the laws providing for the sales of section sixteen, in the different counties in this State; and the moneys accruing from the sale of said lands, shall be disposed of, in the same manner, for the benefit of the inhabitants of the several townships, as other moneys derived from the sale of sections sixteen are.
Persons resisding thereon.
Sec. 3. Be it further enacted, That should there be any person or persons living upon any of the lands selected in lieu of the sixteenth sections in said fractional townships in Green county, or have any improvements thereon, they may apply, after the same shall have been valued, (which valuation shall be the same as if no improvement had been made thereon,) to the school commissioners of said county, who shall permit them to enter the same at the valuation of the trustees of the township, to which said land belongs, and if there should be no trustees in said township to which the land belongs, then the county commissioners’ court of said county, shall appoint three disinterested men of said county to make said valuation.
This act to be in force from and after its passage.
[certification]
01/17/1835
Field, Alexander P.
This bill having remained with the Council of Revision ten days, Sundays excepted, and the General Assembly being in session, it has become a law the 17th January, 1835.
A. P. FIELD, Sec.[Secretary] of State.
1Charles Gregory introduced HB 33 in the House of Representatives on December 15, 1834. The House passed the bill on December 16. On December 18, the Senate took up the bill and referred it to a select committee. On December 22, the select committee reported back the bill with various amendments, in which the Senate concurred. The Senate passed the bill as amended on December 23. The House referred the Senate version to a select committee on December 26. On December 27, the select committee reported back the bill without amendment but recommended that the House reject the first two Senate amendments and adopt the third. The House concurred in the committee’s recommendation. On December 29, the Senate agreed with the House and receded from the first two amendments. The Council of Revision not acting within ten days of the bill’s submission, the act became law on January 17, 1835.
Illinois House Journal. 1835. 9th G. A., 1st sess., 118, 127, 154, 161, 172, 178, 222, 241; Illinois Senate Journal. 1835. 9th G. A., 1st sess., 103, 105, 113, 121, 126, 145, 147-48, 192, 195.
2The Land Ordinance of 1785 reserved the sixteenth section of each full thirty-six-section township to support public schools within the township. Because this fractional township had only ten full sections and several partial sections (including the sixteenth), the General Assembly had to make these special provisions for the sale of public lands to support public schools.
“An Act relating to the lands reserved for the use of Schools,” 2 March 1819, Laws Passed by the First General Assembly of the State of Illinois (1819), 107-9; “Schools, School Lands, and School Fund,” Revised Laws of Illinois (1833), 554-67.
The fractional sixteenth section of this township was located along the north bank of the Mississippi River, near Grafton, Illinois, now part of Jersey County.
Atlas Map of Jersey County, Illinois (Davenport, IA: Andreas, Lyter, and Co., 1872), 90.

An Act Providing for the Sale of the Fractional Sixteenth Section, in Township Six North, Range Twelve West, and Such other Lands as Have Been Selected in Lieu of the Sixteenth Section in the Fractional Townships, on the Mississippi and Illinois Rivers, in Green County. [1835-01-17]. https://papersofabrahamlincoln.org/documents/D251383b. The Papers of Abraham Lincoln Digital Library.