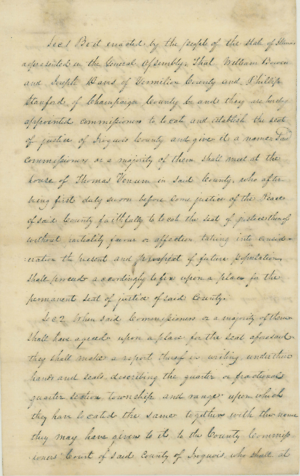 Related Document(s):
An Act to Establish the Seat of Justice of Iroquois County

Sec[Section] 1 Be it enacted by the people of the state of Illinois represented in the General Assembly; That William Bowen and Joseph Davis of Vermilion County and Phillip Stanford of Champaign County be and they are hereby appointed commissioners to locate and establish the seat of justice of Iroquois County and give it a name. Said commissioners or a majority of them shall meet at the house of Thomas Venum in said County, who after being first duly sworn before some justice of the Peace of said County faithfully to locate the seat of justice thereof without partiality[,] favour [,] or affection, taking into consideration the present and prospect of future population shall proceed accordingly to fix upon a place for the permanent seat of justice of said county.
Sec 2 When said Commissioners or a majority of them shall have agreed upon a place for the seat aforesaid they shall make a report thereof in writing, under their hands and seals, describing the quarter or fractional quarter section, township[,] and range upon which they have located the same together with the name they may have given to it, to the County Commissioners Court of said county of Iroquois who shall at
<Page 2>
the next Term of said Court thereafter cause the said report to be entered on the record of said Court, and the place so selected by the said commissioners or a majority of them, shall remain the permanent seat of Justice for Iroquois County; and shall be known and called by such name as may be given to it by said commissioners.
Sec 3 The county commissioners Court of said County shall allow the said commissioners such reasonable compensation per day for their services as they may deem just not exceeding two dollars per day out of the treasury of said county.
Sec 4 Should said commissioners locate said seat of Justice on lands belonging to an individual or individuals, they shall ask and obtain a donation of any number of acres not less than twenty five and also select and describe said donation in their report with reasonable certainly by meter and bounds Provided that should the proprietor or proprietors neglect or refuse to make the donation herein provided for the said commissioners shall then be required to locate the said seat of Justice on the nearest eligible situation on public land, and it shall be the duty of said commissioners previous to locating said seat of justice on the land belonging to any individual or individuals to take a deed in fee simple to
<Page 3>
said County of Iroquois for such land as may be donated as aforesaid: And provided further, that if the said commissioners shall locate said seat of justice on the public land the county commissioners’ court shall be and they are hereby authorized and required to purchase any quantity of land not exceeding one hundred and sixty acres including said town site, in the name and for the use of said county of Iroquois; which land or such part thereof as the county commissioners’ Court may order and direct, shall be laid off into town lots in such manner, and sold for the use and benefit of said county, at such time and place, as the county commissioners’ court thereof may order and direct.
<Page 4>
[docketing]
Senate
A Bill entitled An act to establish the Seat of Justice of Iroquois County
[docketing]
[02]/[03]/[1835]
3
[docketing]
[02]/[03]/[1835]
Engrossed.
[docketing]
02/09/1835
White, Leonard
To be enrolled
Sec[Secretary]. Senate
Feby 9th 1835