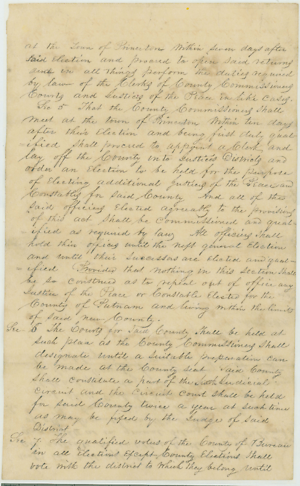 Related Document(s):
An Act to Create the County of Bureau

. . .at the Town of Princeton within seven days after said election and proceed to open said returns and in all things perform the duties required by law of the Clerks of County Commissioners Courts and Justices of the Peace in like cases.
Sec[Section] 5 That the County Commissioners shall meet at the town of Princeton within ten days after their election and being first duly qualified shall proceed to appoint a Clerk and lay off the County into Justices Districts and order an election to be held for the purpose of electing additional Justices of the Peace and Constables for said County And all of the said officiers elected agreeably to the provisions of this act shall be commissioned and qualified as required by law All officiers shall hold their offices until the next general election and until their successors are elected and qualified Provided that nothing in this section shall be so construed as to repeal out of office any Justice of the Peace or Constable elected for the County of Putnam and living within the limits of said new County.
Sec. 6 The Courts for said County Shall be held at such place as the County Commissioners shall designate until a suitable preparation can be made at the County seat Said County shall constitute a part of the Sixth Judicial circuit and the circuit court shall be held for such County twice a year at such time as may be fixed by the Judge of said District.
Sec 7. The qualified voters of the County of Bureau in all elections except County Elections shall vote with the district to which they belong until
<Page 2>
until the next apportionment and shall in all respects be entitled to the same privileges and rights as in general belong to the citizens of other Counties in this state
Sec 8. The Commissioners to locate the County seat shall each be paid the sum of three dollars per day out of the County Treasury of said County for each day they may be employed in making said location
[certification]
02/18/1837
Prickett, David (Pricket)
Passed H. R. Feb. 18th 1837.
D. Prickett clk.[clerk] H. R.
<Page 3>
<Page 4>
[docketing]
01/25/1837
2
[docketing]
No 187
[docketing]
H. R.
An act to create the County of Bureau
[docketing]
[02]/[23]/[1837]
Hamlin
Butler
Thomas1
[docketing]
[02]/[17]/[1837]
To 3d Reading
[docketing]
[02]/[28]/[1837]
Prickett, David (Pricket)
To be Enrolled
clk H R
[docketing]
[02]/[08]/[1837]
Engrossed
1These legislators formed the select committee in the Senate that considered the bill.
Illinois Senate Journal. 1836. 10th G. A., 1st sess., 498.