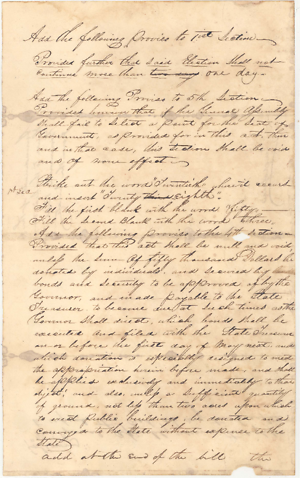 Add the following Proviso to 1ist Section—
Provided further that said Election shall not continue more than two days one day.
Add the following Proviso to 5th Section—
Provided however that if the General Assembly shall fail to select a point for the seat of Government, as provided for in this act, then and in that case, this section shall be void and of none effect.
Strike out the word “Twentieth” where it occurs—^1st sec^ and insert “Twenty third eighth.”
Fill the first blank with the word “fifty”.
Fill the Second Blank with the word “three”
Add the following proviso to the 4th section—
Provided that this act shall be null and void, unless the sum of fifty thousand Dollars be donated by individuals, and secured by lands bonds and security to be approved of by the Governor, and made payable to the State Treasurer, to become due at such times as the Governor shall direct, which bonds shall be executed and filed with the State Treasurer on or before the first day of May next, and which donation is especially designed to meet the appropriation herein before made, and shall be applied exclusively and immediately to that object; and also, unless a sufficient quantity of ground, not less than two acres upon which to erect public buildings, be donated and conveyed to the State without expense to the state
add at the end of the bill the
<Page 2>
following:
“This General Assembly reserves the right to repeal this act at any time hereafter”.
[docketing]
Amendments of the House to the seat of Government Bill from the senate
[docketing]
Engrossed

Amendment to "A Bill Permanently to Locate the Seat of Government of the State of Illinois". [1837-02-24]. /documents/D255494. The Papers of Abraham Lincoln Digital Library.