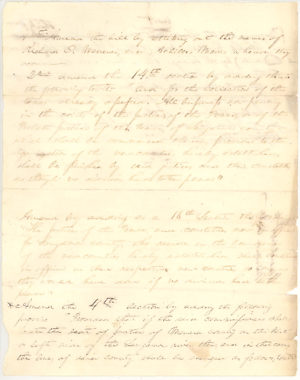 Amendment to “A Bill to Establish the Counties of Menard, Logan, and Dane,” [6 February 1839]1
1st. Amend the bill by striking out the names of Richard O. Warrener, and Achilles Morris wherever they occur—
2nd amend the 14th section by adding thereto the following towit: “and for the collection of the taxes already assessed. All bussiness now pending in the courts of the Justices of the Peace, or of the Probate Justice of the Peace, of Sangamon county, or which shall be commenced therein, previous to the organization of the new counties hereby established, shall be finished by said justices and their constables as though no division had taken place”
Amend by adding as a 16th Section the following: “The Justices of the Peace and constables now in office for Sangamon county, who reside in the boundaries of the new counties hereby established, shall continue in office in their respectives new counties so long as they would have done if no division had taken place”
*Amend the 4th section by adding the following proviso “Provided that if the said commissioners shall locate the seat of Justice of Menard county on the West or left side of the Sangamon river, then, and in that case, the lines of said county shall be changed as follows, towit
<Page 2>
(Begining at the South ^West East West^ corner of section Twenty seven^thirty four^ in Township Eighteen North of Range Six West; thence North ^3^ (two) miles) by the surveys; thence East with the surveys to the Eastern boundary line of said county as described in this act; thence with the before described boundaries throughout— Provided further, that said commissioner’s in making the location of the seat of Justice of said county, shall pay no regard whatever, to the above contemplated change of lines—
[docketing]
Amendment to Menard Couty
1Abraham Lincoln wrote the body of this amendment in its entirety except for the interlineations “west” and “thirty four” in the first line of the second page.
These amendments, written by Lincoln but coming out of a Senate select committee, amended a bill penned and introduced by Abraham Lincoln in the House of Representatives on January 16, 1839. The House passed the bill on January 21, and the Senate referred it to a select committee on February 5. The select committee reported back the bill on February 6 with these amendments, in which the Senate concurred. The Senate passed the bill as amended. Later that same day, the House concurred in the Senate amendment with minor modifications, but Lincoln moved to re-consider that vote and offered an amendment to the Senate amendment, which the House approved. The Senate passed the bill as amended on February 7. The Council of Revision approved the bill on February 15, and the Senate amendments as amended became part of the act that became law.
Illinois House Journal. 1838. 11th G. A., 1st sess., 217-18, 253, 357; Illinois Senate Journal. 1838. 11th G. A., 1st sess., 280, 287, 291.