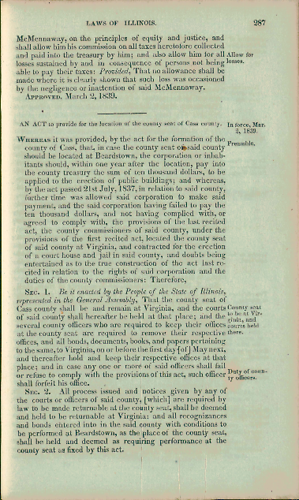 In force, Mar.[March] 2, 1839.
AN ACT to provide for the location of the county seat of Cass county.
1
Preamble.
Whereas it was provided, by the act for the formation of the county of Cass, that, in case the county seat of said county should be located at Beardstown, the corporation or inhabitants should, within one year after the location, pay into the county treasury the sum of ten thousand dollars, to be applied to the erection of public buildings; and whereas, by the act passed 21st July, 1837, in relation to said county, further time was allowed said corporation to make said payment, and the said corporation having failed to pay the ten thousand dollars, and not having complied with, or agreed to comply with, the provisions of the last recited act, the county commissioners of said county, under the provisions of the first recited act, located the county seat of said county at Virginia, and contracted for the erection of a court house and jail in said county, and doubts being entertained as to the true construction of the act last recited in relation to the rights of said corporation and the duties of the county commissioners:2 Therefore,
County seat to be at Virginia, and courts held there.
Duty of county officers.
Sec.[Section] 1. Be it enacted by the People of the State of Illinois, represented in the General Assembly, That the county seat of Cass county shall be and remain at Virginia, and the courts of said county shall hereafter be held at that place; and the several county officers who are required to keep their offices at the county seat are required to remove their respective offices, and all bonds, documents, books, and papers pertaining to the same, to Virginia, on or before the first day (of) May next, and thereafter hold and keep their respective offices at that place; and in case any one or more of said officers shall fail or refuse to comply with the provisions of this act, such officer shall forfeit his office.
Sec. 2. All process issued and notices given by any of the courts or officers of said county, (which) are required by law to be made returnable at the county seat, shall be deemed and held to be returnable at Virginia: and all recognizances and bonds entered into in the said county with conditions to be performed at Beardstown, as the place of the county seat, shall be held and deemed as requiring performance at the county seat as fixed by this act.
<Page 2>
Questions of forfeiture, how settled.
Sec. 3. That, in order to settle any and all questions which may arise as to the forfeiture of office by any officer of the said county of Cass under the provisions of this act, any officer failing to comply with the provisions hereof shall be liable to indictment for such failure, and, upon conviction, the court shall enter judgment of a motion from office, and the vacancy occasioned thereby shall be filled as though it had occurred by resignation.3
Approved, March 2, 1839.
1William Holmes introduced HB 202 to the House of Representatives on January 24, 1839. The House passed the bill on February 23. The Senate passed the bill on March 2. The Council of Revision approved the bill that day and the act became law.
Illinois House Journal. 1838. 11th G.A., 1st sess., 276-77, 431, 458, 492, 596, 602, 606; Illinois Senate Journal. 1838. 11th G.A., 1st sess., 407, 484, 502-3, 508-9.
2After Beardstown failed to pay any portion of the $10,000 for the erection of the courthouse and jail, the county commissioners relocated the county seat to Virginia, Illinois, where Dr. Henry H. Hall conveyed fifteen acres of land to the county. The county commissioners appointed Hall to lay out the fifteen-acre tract with areas for the courthouse and sell the remaining lots on behalf of the county. They later reconveyed the lots on twelve acres to Hall, in exchange for his building a brick courthouse and jail. Construction began in the fall of 1838 and was completed in mid-1839.
J. N. Gridley, “The County Seat Battles of Cass County, Illinois,” Journal of the Illinois State Historical Society 7 (October 1914), 170-71.
3In 1843, Cass County voters decided to return the county seat to Beardstown, which occurred in 1845. Supporters of Virginia tried unsuccessfully several times to reclaim the designation over the next three decades. In November 1872, county voters narrowly chose to return the seat of government to Virginia, but court challenges all the way to the Illinois Supreme Court delayed the move until mid-1875.
Gridley, “County Seat Battles,” 171-94.