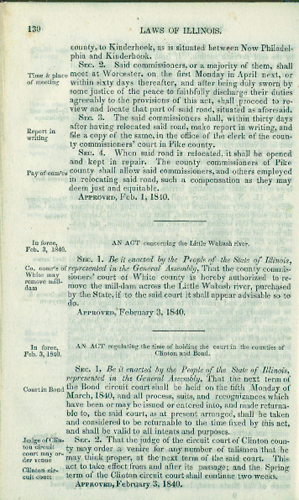 Related Document(s):
A Bill Regulating the Time of Holding the Court in the Counties of Clinton and Bond

In force, Feb.[February] 3, 1840.
AN ACT regulating the time of holding the court in the counties of Clinton and Bond.
1
Court in Bond
Sec.[Section] 1. Be it enacted by the People of the State of Illinois, represented in the General Assembly, That the next term of the Bond circuit court shall be held on the fifth Monday of March, 1840, and all process, suits, and recognizances which have been or may be issued or entered into, and made returnable to, the said court, as at present arranged, shall be taken and considered to be returnable to the time fixed by this act, and shall be valid to all intents and purposes.
Judge of Clinton circuit court may order venue
Clinton circuit court
Sec. 2. That the judge of the circuit court of Clinton county may order a venire for any number of talismen that he may think proper, at the next term of the said court. This act to take effect from and after its passage; and the Spring term of the Clinton circuit court shall continue two weeks.
Approved, February 3, 1840.
1An unknown representative introduced HB Misc Bill 2 to the House of Representatives as “An act regulating the practice of the Circuit Courts in criminal cases.” The House passed the bill on January 30, 1840, and changed the name to its final text. The Senate passed the bill on February 1. The Council of Revision approved the bill on February 3 and the act became law.
Journal of the House of Representatives of the Eleventh General Assembly (Springfield, IL: William Walters, 1839), 264, 296-97, 322, 338, 339; Journal of the Senate of the Eleventh General Assembly (Springfield, IL: William Walters, 1839), 220, 238-39.

An Act Regulating the Time of Holding the Court in the Counties of Clinton and Bond. [1840-02-03]. /documents/D271582b. The Papers of Abraham Lincoln Digital Library.