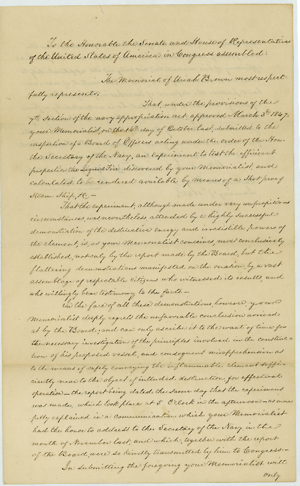 Petition of Uriah Brown to U.S. Congress, 17 January 18481
To the Honorable the Senate and House of Representatives of the United States of America in Congress assembled:
The Memorial of Uriah Brown most respectfully represents;
That, under the provisions of the 7th section of the navy appropriation act, approved March 3rd 1847, your Memorialist, on the 16th day of October last, submitted to the inspection of a Board of Officers acting under the order of the Hon. the Secretary of the Navy, an Experiment, to test the efficient properties the Liquid Fire discovered by your Memorialist, and calculated to be rendered available by means of a Shot proof Steam Ship, &c.[etc]–2
That the experiment, although made under very unpropitious circumstances, was, nevertheless, attended by a highly Successful demonstration of the destructive Energy and irresistible powers of the element, is, as your Memorialist conceives, most conclusively established, not only by the report made by the Board, but the flattering demonstrations manifested on the occasion, by a vast assemblage of respectable citizens who witnessed its results, and who willingly bear testimony to the facts.–
In the face of all these demonstrations, however, your memorialist deeply regrets the unfavorable conclusion arrived at by the Board; and can only ascribe it to the want of time for the necessary investigation of the principles involved in the construction of his proposed vessel, and consequent misapprehension as to the means of safely conveying the inflammable Element sufficiently near to the object of intended destruction, for effectual operation—the report being dated the same day that the experiment was made, which took place at 5 O’clock in the afternoon—as more fully explained in a communication which your Memorialist had the honor to address to the Secretary of the Navy, in the month of November last; and which, together with the report of the Board, were so kindly transmitted by him to Congress.–3
In submitting the foregoing your Memorialist will ^only^
<Page 2>
only add that, the result of the late experiment has the more firmly established his conviction as to the practical efficiency of his invention, not only in its applicability to coast and harbor defence, but, to the control of narrow land passes—the defence of breaches in fortifications—repelling escalades, &c; and that, he is actuated by a firm reliance in the patriotism, justice, and liberality of your Honorable Body, to adopt such measures in the premises, as shall, in your wisdom, be calculated to secure to the country, the benefits of this invention.–4
All which is most respectfully submitted,Uriah BrownWashington City,
January 17th 1848.
<Page 3>
<Page 4>
[docketing]
Memorial of Uriah Brown
[docketing]
Lincoln, Abraham (President)
praying for a further testing of his dicovery of “liquid fire” to be used in the National defences–5
[docketing]
Lincoln, Abraham (President)
Refer to Committee on Naval Affairs–6
[docketing]
01/21/1848
January 20 ^21^, 1848 Referred to the Committee on Naval Affairs
[docketing]
02/29/1848
Feb[February] 29, 1848. [advs ?] 1380
[docketing]
Stanton
72 adv rep[adverse report]
lie & pr[print]
[docketing]
F 13
[docketing]
Lincoln, Abraham (President)
A. Lincoln7
1Uriah Brown wrote and signed the petition. Abraham Lincoln authored two instances of docketing on the last page, and also signed his own name.
2 Section seven of the 1847 navy appropriation act ordered the secretary of the navy to authorize experiments, under the direction of Brown, to test the properties of liquid fire and a shot-proof steamship, both invented by Brown.
“An Act Making Appropriations for the Naval Service for the Year Ending the Thirtieth June, One Thousand Eight Hundred and Forty-Eight,” 3 March 1847, Statutes at Large of the United States 9 (1862):169-73.
3The report on Brown’s experiment cited multiple practical difficulties that precluded Brown’s “liquid fire” from being a viable military weapon.
John S. Chauncey, J. N. Powell, and E. B. Boutwell to J. Y. Mason, 16 October 1847, Message from the President of the United States to the Two Houses of Congress at the Commencement of the First Session of the Thirtieth Congress (Washington, DC: Wendell and Van Benthuysen, 1847) 1306-08; Uriah Brown to John Y. Mason, 27 November 1847, Message from the President of the United States to the Two Houses of Congress at the Commencement of the First Session of the Thirtieth Congress (Washington, DC: Wendell and Van Benthuysen, 1847), 1308-10.
4Lincoln presented this petition in the U.S. House of Representatives on January 21, 1848, and the House referred it to the Committee on Naval Affairs. On February 29, 1848, the committee reported back unfavorably, and the House tabled the report and ordered it to be printed. No further action was taken on Brown’s inventions in the 30th Congress.
U.S. House Journal. 1848. 30th Cong., 1st sess., 273, 472.
5Lincoln wrote this docketing.
6Lincoln wrote this stricken text.
7Lincoln wrote this stricken text. This signature possibly connects to the previous stricken text in Lincoln’s hand.