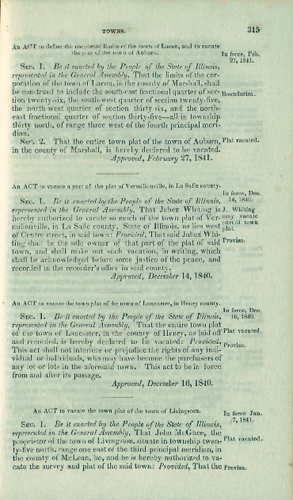 In force, Feb.[February] 27, 1841.
An ACT to define the corporate limits of the town of Lacon, and to vacate the plat of the town of Auburn.
1
Boundaries.
Sec.[Section] 1. Be it enacted by the People of the State of Illinois, represented in the General Assembly, That the limits of the corporation of the town of Lacon, in the county of Marshall, shall be construed to include the south-east fractional quarter of section twenty-six, the south-west quarter of section twenty-five, the north-west quarter of section thirty-six, and the north-east fractional quarter of section thirty-five—all in township thirty north, of range three west of the fourth principal meridian.
Plat vacated.
Sec. 2. That the entire town plat of the town of Auburn, in the county of Marshall, is hereby declared to be vacated.2
Approved, February 27, 1841.
1William H. Henderson introduced HB 252 in the House of Representatives on February 15, 1841, and the House passed it. The Senate concurred on February 24. On February 27, the Council of Revision approved the bill and the act became law.
Illinois House Journal. 1840. 12th G. A., 403, 503, 546, 547, 564; Illinois Senate Journal. 1840. 12th G. A., 323, 396-97.
2Illinois experienced a time of intense land speculation in the 1830s that resulted in a number of “paper towns,” settlements that were platted and available for sale but where few or no people actually lived. Many of the proprietors of these settlements abandoned them during and after the Panic of 1837. As a result, the General Assembly received a large number of petitions for vacation during their sessions from 1838 to 1841. In 1841, the legislature passed an act setting parameters for proprietors to vacate town plats themselves. Vacating a plat gave owners greater flexibility in the use, fencing, and sale of the property.
An Act to Vacate Town Plats; Alasdair Roberts, America’s First Great Depression: Economic Crisis and Political Disorder after the Panic of 1837 (Ithaca, NY: Cornell University Press, 2012), 19, 33, 38; James E. Davis, Frontier Illinois (Bloomington: Indiana University Press, 1998), 210-11; Robert P. Howard, Illinois: A History of the Prairie State (Grand Rapids, MI: William B. Eerdmans, 1972), 196.

An Act to Define the Corporate Limits of the Town of Lacon, and to Vacate the Plat of the Town of Auburn. [1841-02-27]. /documents/D283781b. The Papers of Abraham Lincoln Digital Library.