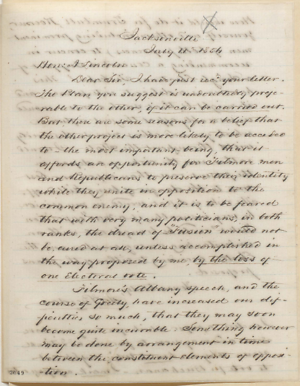 James Berdan to Abraham Lincoln, 11 July 18561
Jacksonville
July 11th 1856Hon: A Lincoln–Dear Sir,
I have just recd[received] your letter. The Plan you suggest is undoubtedly preferable to the other, if it can be carried out. But, there are some reasons for a belief that the other project is more likely to be acceded to— the most important being, that it affords an opportunity for Filmore men and Republicans to preserve their identity while they unite in opposition to the common enemy, and it is to be feared that with very many politicians, in both ranks, the dread of “Fusion” would not be cured at all, unless accomplished in the way proposed by me, by the loss of one Electoral vote.2
Filmore’s Albany speech, and the course of Greely, have increased our difficulties so much, that they may soon become quite incurable.3 Something however may be done by arrangement in time between the constituent elements of opposition.
<Page 2>
How would it do for Trumbull, Koerner, yourself and others (including prominent men of both preferences) to concur in recommending a concerted support of a Single Electoral Ticket? This however is a delicate interference, and it might be that such a move would unfavorably affect the just influence which you and others now so deservedly wield throughout the State.4 I would rather run the risks of a defeat in the present race, than expose our best men to the danger of being Killed off. The risks of defeat would in my opinion be very insurable, if a mere “opposition Ticket” could be brought out with an understanding among ourselves and the Electors according to either of the plans proposed.5
Yours truly,Jas BerdanI enclose a paper which you may not have seen and may serve to furnish additional reason why an honest Whig ought not to vote for Buchanan– I mark a passage or two6
1James Berdan wrote and signed this letter.
2Berdan references a strategy for winning Illinois in the presidential election of 1856. Republicans nominated John C. Fremont as their first presidential candidate, while Democrats nominated James Buchanan. The American Party, in its final participation in a presidential election, nominated Millard Fillmore. See 1856 Federal Election.
Berdan’s initial suggestion to defeat Buchanan in Illinois involved ten of Illinois’ state electors being agreed upon by supporters of both Fillmore and Fremont, allowing the eleventh elector to be a supporter of either man. Lincoln’s altered proposition meant uniting Fremont and Fillmore onto one ticket.
3Fillmore’s July 1856 campaign speech at Albany, New York, produced negative reactions from several groups. He appeared to support southern secession (upsetting northerners), claimed the Republican Party exacerbated sectional tensions (alienating potential Republican voters), and supported the nativist policy of barring Catholics from public office.
Horace Greeley and the New York Tribune supported Fremont but generally avoided making direct attacks on Fillmore.
Glyndon G. Van Deusen, Horace Greeley: Nineteenth-Century Crusader (Philadelphia: University of Pennsylvania Press, 1953), 208; Robert J. Scarry, Millard Fillmore (Jefferson, NC: McFarland, 2001), 282.
4Lincoln described one important concern with the fusion approach in his letter to Berdan on July 10.
Germans would have opposed Fillmore because of the American Party’s nativist ideology. Once prospective members gave assurances that they were of proper age, that they had been born in the United States, that their parents were Protestants, and that they were not married to Roman Catholics, candidates were required to pledge to use their influence “and vote only for native-born American citizens for all offices of honor, trust or profit in the gift of the people, the exclusion of all foreigners and Roman Catholics in particular, and without regard to party predilections.”
Ray Allen Billington, The Protestant Crusade 1800-1860: A Study of the Origins of American Nativism (New York: MacMillan, 1938), 384; Arthur Charles Cole, The Era of the Civil War 1848-1870, vol. 3 of The Centennial History of Illinois (Springfield: Illinois Centennial Commission, 1919), 150.
5Despite his concerns, Lincoln pursued a plan for fusion. In September 1856, he wrote to several of his connections asking for the names of Fillmore supporters. He then sent lithographed form letters to the names provided. The form letters informed the Fillmore supporters that every vote for their candidate in Illinois lessened his chance of becoming president.
Lincoln and his fellow Republicans failed to convince Fillmore’s supporters to unite, allowing Democrats to label their opponents as both nativists and worshippers of African-Americans. Lincoln’s prediction proved prophetic: Buchanan captured Illinois with 44.1 percent of the vote to 40.2 percent for Fremont and 15.7 for Fillmore, and Buchanan defeated Fremont and Fillmore to become fifteenth president of the United States. Indeed, if the votes received by Fremont and Fillmore in Illinois had been combined, Buchanan’s vote would not have been sufficient to carry the state. See the 1856 Federal Election.
Abraham Lincoln to Jesse A. Pickrell; Thomas A. Marshall to Abraham Lincoln; Thomas F. Schwartz, “Lincoln, Form Letters, and Fillmore Men,” Illinois Historical Journal 78 (Spring 1985), 66; Abraham Lincoln to Thomas Hull; Abraham Lincoln to Edward Lawrence; Abraham Lincoln to William Ryan; Michael Burlingame, Abraham Lincoln: A Life (Baltimore: The Johns Hopkins University Press, 2008), 1:432-33; Philip G. Auchampaugh, “Campaign of 1856,” Dictionary of American History, rev. ed. (New York: Charles Scribner’s Sons, 1976), 1:420-21; Howard W. Allen and Vincent A. Lacey, eds., Illinois Elections, 1818-1990 (Carbondale and Edwardsville: Southern Illinois University Press, 1992), 10.
6The referenced enclosure has not been located.