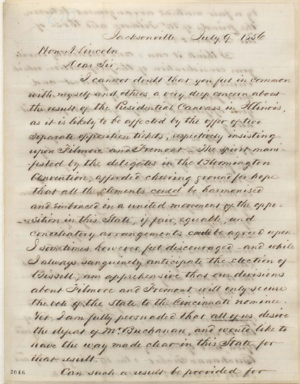 James Berdan to Abraham Lincoln, 9 July 18561
Jacksonville– July 9th 1856Hon A. Lincoln–Dear Sir,
I cannot doubt that you feel in common with myself and others, a very deep concern about the result of the Presidential Canvass in Illinois, as it is likely to be affected by the offer of two separate opposition tickets, respectively insisting upon Filmore and Fremont–2 The spirit manifested by the delegates in the Bloomington Convention, afforded cheering ground for hope that all the elements could be harmonised and embraced in a united movement of the opposition in this State, if fair, equable, and conciliatory arrangements could be agreed upon.3 I sometimes however feel discouraged— and while I always sanguinely anticipate the election of Bissell, am apprehensive that our divisions about Filmore and Fremont will only secure the vote of the state to the Cincinnati nominee.4 Yet, I am fully persuaded that all of us desire the defeat of Mr Buchanan, and would like to have the way made clear in this State for that result.
Can such a result be provided for
<Page 2>
by a fair mutual arrangement between the friends of Mr Filmore and those of Mr Fremont?
I think it can: and earnestly invite your consideration of the proposition which occurs to me as being the fairest and most promising— and if it meets with your approval, I hope you will pass it along.
It is this:— Get 10 out of the 11 State Electors, be united upon by the friends of Mr Filmore and of Mr. Fremont,— and let the Eleventh names on their separate tickets be a names chosen by them respectively as being indicative of their peculiar Presidential preferences. Get the 10 common Electors, accept their nominations with a pledge to cast the Electoral vote for Filmore or Fremont as the 11th name may receive on either ticket the highest vote.
The Electoral College, if the united opposition succeeded, would then consist of the ten individuals whose names were agreed upon, and of the highest name on the Buchanan Ticket: the 10 being fully and fairly instructed how to cast the vote.
<Page 3>
I have submitted this proposition to Yates and others, and they concur with me in the opinion that if the arrangement can be effected, it will insure success to our opposition to Buchanan–
I pray you to think of it. I repeat that I feel sometimes quite discouraged about the triangle in which we are likely to fork out ^in slender convergents^ from a solid base that may be given to Buchanan. I find my causes of concern in the course which the NY Tribune seems disposed to pursue towards Mr Filmore,5 and in the demonstrations in other quarters towards Mr Fremont— and I am satisfied that unless a provisional agreement be made in time, serious discords are likely to separate us in the midst of one of the most important, interesting, and hopeful campaigns in which any of us were ever enlisted.
I have had to write amidst some interruptions— but hope you will understand my views, and heed them a little for the sake of the cause.6
Yours most truly,Jas Berdan
1James Berdan wrote and signed this letter.
2Republicans nominated John C. Fremont as their first presidential candidate, while Democrats nominated James Buchanan. The American Party, in its final participation in a presidential election, nominated Millard Fillmore. See 1856 Federal Election.
3The end of the Whig Party and the rise of the American—or “Know-Nothing”—Party added a third-party element to the 1856 Federal Election. Lincoln and the Republicans believed they could create an alliance with the American Party against the Democrats over the issue of the extension of slavery in the territories, which the Democrats supported.
Thomas F. Schwartz, “Lincoln, Form Letters, and Fillmore Men,” Illinois Historical Journal 78 (Spring 1985), 68.
4William H. Bissell became the first Republican elected governor of Illinois in 1856, barely beating out Democratic nominee William A. Richardson, 47 percent to 45 percent, respectively, and American Party nominee Buckner S. Morris received 8 percent of the vote.
Howard W. Allen and Vincent A. Lacey, eds., Illinois Elections, 1818-1990 (Carbondale and Edwardsville: Southern Illinois University Press, 1992), 10.
5Horace Greeley and the Tribune supported Fremont but generally avoided making direct attacks on Fillmore.
Glyndon G. Van Deusen, Horace Greeley: Nineteenth-Century Crusader (Philadelphia: University of Pennsylvania Press, 1953), 208.
6Lincoln responded the next day, July 10. Promising to consider Berdan’s plan to furnish supporters of Fremont and Fillmore to the Electoral College for Illinois, Lincoln took it a step further and suggested uniting the two men onto one ticket. In September, Lincoln wrote to several of his connections asking for the names of Fillmore supporters. He then sent lithographed form letters to the names provided. The form letters informed the Fillmore supporters that every vote for their candidate in Illinois lessened his chance of becoming president. Lincoln and his fellow Republicans failed to convince Fillmore’s supporters to unite, allowing Democrats to label their opponents as both nativists and worshippers of African-Americans. Berdan’s and Lincoln’s prediction proved prophetic: Buchanan captured Illinois with 44.1 percent of the vote to 40.2 percent for Fremont and 15.7 for Fillmore, and Buchanan defeated Fremont and Fillmore to become fifteenth president of the United States. Indeed, if the votes received by Fremont and Fillmore in Illinois had been combined, Buchanan’s vote would not have been sufficient to carry the state. See the 1856 Federal Election.
Abraham Lincoln to Jesse A. Pickrell; Thomas A. Marshall to Abraham Lincoln; Thomas F. Schwartz, “Lincoln, Form Letters, and Fillmore Men,” Illinois Historical Journal 78 (Spring 1985), 66; Abraham Lincoln to Thomas Hull; Abraham Lincoln to Edward Lawrence; Abraham Lincoln to William Ryan; Michael Burlingame, Abraham Lincoln: A Life (Baltimore: The Johns Hopkins University Press, 2008), 1:432-33; Philip G. Auchampaugh, “Campaign of 1856,” Dictionary of American History, rev. ed. (New York: Charles Scribner’s Sons, 1976), 1:420-21; Howard W. Allen and Vincent A. Lacey, eds., Illinois Elections, 1818-1990, 10.