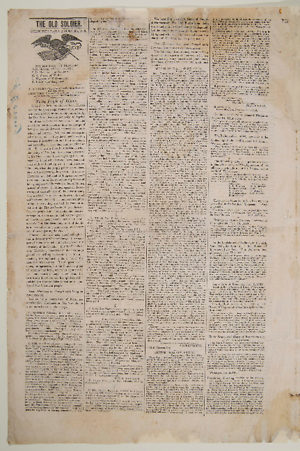 Anson G. Henry and Others to the People of Illinois, 29 June 18401
To the People of Illinois.
Ever since the nomination of Gen. Harrison by the Harrisbugh Convention, we have witnessed a constant and malignant effort by the Van Buren leaders, not only to deprive him of his well earned fame as a soldier and a civilian, but to fasten on him the charge of being an abolitionist—an accusation equally odious and untrue.2 We need not be surprised at these effort they have made;—first, because it is easier to attack than to defend; and secondly, because they cannot defend at all. There was a time in this State, when the policy of Mr. Van Buren was advocated by his friends, and the charges against him repelled, if not with facts and arguments, at least with zeal and apparent confidence.—But now, when the people point to the disorders of the currency, they are told that Gen. Harrison was defeated at Tippecanoe!—if they complain of the reduction of prices and labor, they are told he rode Jo. Davies’ horse, instead of his own!3—if they speak of the extravagant expenditures of the Government, they are told he was not at the river Raisin!4—if they complain of the boundless corruption in high places, they are told he was not at battle of the Thames!—and if yet dissatisfied, the people (suffering under the misrule, corruption, experiments and extravagance of the Government) should turn their thot’s[thoughts] towards Gen. Harrison, they are told that he is in favor of selling white men into slavery and of emancipating the slaves!5
There is, to our minds, proof enough even in these miserable evasions, of the weakness of a cause which cannot bear even the advocacy of its friends. But the friends of Gen. Harrison, conscious of their vantage ground, are willing to examine his life and conduct, forming, as they do, a part of the history of his country. They appeal to his votes, his speeches, and his letters, as proof of what he has done, and what opinions he has entertained;—they show from his own words that these are his opinions still; and doing so, they confidently rest on the justice of the American people.
1Abraham Lincoln was one of the editors of the Old Soldier, so the text is attributed to him, but the extent of his participation in its composition is unknown.
2Harrison was the Whig candidate challenging the incumbent Martin Van Buren in the 1840 presidential election. Southern Democrats accused Harrison, a Virginian born into a slave-holding family, of being an abolitionist based in part on his support among Northern Whigs, whom they argued were dominated by abolitionists, and in part on his membership half a century earlier in the Richmond Humane Society, an anti-slavery organization. Harrison actually had a mixed record regarding slavery. He owned slaves himself--though not while as president. While governor of the Indiana Territory, he worked to suspend the Northwest Ordinance’s prohibition against slavery. While a member of Congress from Ohio, he stated that he was opposed to slavery, but in debates over the extension of slavery to the new states or territories, he sided with pro-slavery Southerners and voted for extension. In his public speeches during the 1840 campaign, he was purposely ambiguous regarding slavery in the Southern states, expansion of slavery into new states and territories, and anti-slavery and abolitionism.
Daniel Walker Howe, What Hath God Wrought: The Transformation of America, 1815-1848 (New York: Oxford University Press, 2007), 137; Michael F. Holt, The Rise and Fall of the American Whig Party: Jacksonian Politics and the Onset of the Civil War (New York: Oxford University Press, 1999), 111; Gail Collins, William Henry Harrison (New York: Times Books, 2012), 12-13, 32, 63.
3Joseph H. Daveiss died leading a cavalry charge during the Battle of Tippecanoe. Harrison lost a horse during the battle, but there is no evidence that he commandeered Daveiss’s horse to continue the fighting.
David C. Skaggs, William Henry Harrison and the Conquest of the Ohio Country: Frontier Fighting in the War of 1812 (Baltimore: Johns Hopkins University Press, 2014), 73-74.
4Harrison was in overall command of American forces during the two battles of River Rasin, but General James Winchester had command on ground during both battles and was blamed for the defeat at the second battle on January 22, 1813. Harrison and his column did not make it in time to help Winchester.
Donald R. Hickey, The War of 1812: A Forgotten Conflict, Bicentennial Ed., (Urbana: University of Illinois Press, 2012), 84-85.
5Currency problems, declining prices and wages, and other economic woe rose in the aftermath of the Panic of 1837, the residual effects of which plagued the Van Buren administration throughout its tenure. Instead of trying to defend Van Buren, who became increasingly unpopular due to his stumbling response to the Panic, Amos Kendall, director of the Van Buren re-election campaign, decided to launch personal attacks on Harrison.
Gail Collins, William Henry Harrison (New York: Times Books, 2012), 109.