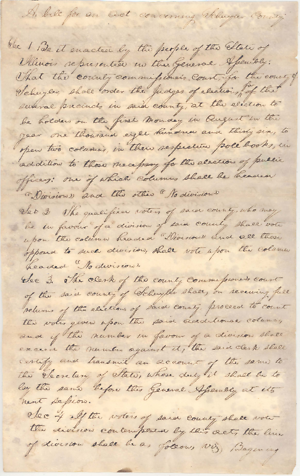 Related Document(s):
A Bill concerning the county of Schuyler

A Bill concerning Schuyler County, [15 December 1835]1
A bill for an Act concerning Schuyler County
Sec[Section] 1 Be it enacted by the people of the State of Illinois represented in the General Assembly: That the county commissioner's court, for the county of Schuyler, shall order the Judges of elections ^for^ of the several precincts in said county, at the election to be holden on the first Monday in August in the year one thousand eight hundred and thirty six, to open two columns, in their respective poll books, in addition to those necessary for the election of public officers: one of which columns shall be headed "Division" and the other "No division"
Sec 2 The qualified voters of said county, who may be in favour of a division of said county shall vote upon the column headed "Division" and all those opposed to such division, shall vote upon the column headed "No division"
Sec 3. The clerk of the county commissioner's court of the said county of Schuyler shall, on receiving full returns of the elections of said county, proceed to count the votes given upon the said additional columns, and if the number in favour of a division shall exceed the number against it, the said clerk shall certify and transmit an account of the same to the Secretary of State, whose duty it shall be to lay the same before this General Assembly at it's next session.
Sec 4 If the voters of said county shall vote the division contemplated by this act, the line of division shall be as follows (viz) Begining
<Page 2>
at the mouth of Crooked creek on the Illinois River. Thence up said creek with it's meanderings to the Northern boundry line of Township No one North. Thence West with said line, to the line dividing Ranges Three and Four West. Thence North with said line to the Northern boundry line of Township No Two North. Thence West with said line to the corner of Hancock and Adams counties: All that portion of the said county of Schuyler lying South and West of said division line, shall thence forward constitute and form a new county: Provided that said new county shall remain attached to the county of Schuyler for all county purposes until it's organization be provided for by law—2
<Page 3>
<Page 4>
[docketing]
6
[docketing]
A. Bill for an act concerning Schuyler county
[docketing]
[12]/[16]/[1835]
2
[docketing]
[12]/[16]/[1835]
Sel com
Van Devanter
Thompson
Oliver3
[docketing]
[12]/[17]/[1835]
Prickett, David (Pricket)
to be Engrossed
Clk. H. R.
1On December 15, 1835, Jacob Vandeventer introduced HB 23, which was authored by Abraham Lincoln, in the House of Representatives. The House passed the bill on December 22. On January 15, 1836, the Senate postponed consideration of the bill indefinitely.
Illinois House Journal. 1835. 9th G. A., 2nd sess., 38, 65, 73, 79, 122, 337; Illinois Senate Journal. 1835. 9th G. A., 2nd sess., 95, 191-92, 251.
2Schuyler County remained undivided until 1839, when the General Assembly passed an act creating Brown County out of the southern portion of Schuyler.
Combined History of Schuyler and Brown Counties, Illinois (Astoria, IL: Stevens, 1882), 78-80.
3These legislators formed the select committee in the House of Representatives that considered the bill.
Illinois House Journal. 1835. 9th G. A., 2nd sess., 73.