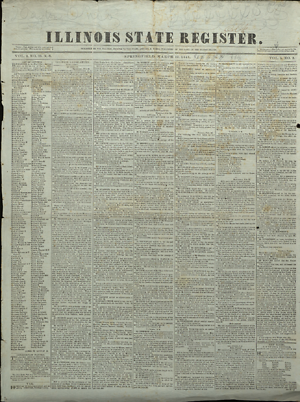 Summary of Legislative Debate on Bill to Complete the Illinois and Michigan Canal, 26 February 18411
On motion of Mr LINCOLN, the bill for the speedy completion of the Illinois and Michigan canal, was taken up.
Mr LINCOLN offered an amendment, whereupon the Sergeant at-Arms having reported, it was laid aside for the present...2
The consideration of the bill for the completion of the Canal, was then resumed.
Mr LINCOLN addressed the House in support of the bill.
The amendment of Mr LINCOLN was then read, authorizing the Governor to borrow three millions of dollars on Bonds, for the canal.
Mr OLDS said, that on yesterday a bill was passed increasing the taxation of the state 62½ per cent, and here was a proposition to increase the indebtedness of the State to a much larger amount.
Mr BISSELL offered to amend by striking out three million and inserting one and a half, which Mr Lincoln accepted as a modification of his amendment.
Mr LINCOLN then addressed the House in support of the measure, and entered into an argument shewing that to prosecute the work now was in fact the most economical plan that could be adopted: to stop it, would involve the State in much more debt and ruin.
Mr KITCHELL replied: when the question on the amendment as modified was taken and it was agreed to, yeas 41, nays 32.
The bill was then ordered to a third reading.
1This summary of the debate is from the Illinois State Register, a Democratic newspaper. Another report comes from the Whig paper, the Sangamo Journal.
Illinois House Journal. 1840. 12th G. A., 518-20.
2The House of Representatives suspended debate to consider a bill for letting out a portion of the Northern Cross Railroad.

Summary of Legislative Debate on Bill to Complete the Illinois and Michigan Canal. [1841-02-26]. /documents/D200270b. The Papers of Abraham Lincoln Digital Library.