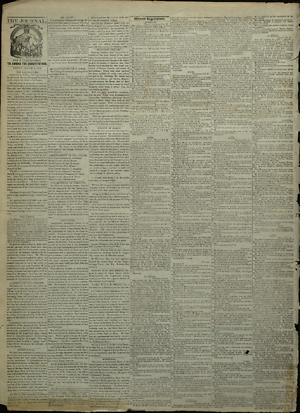 Report of Legislative Debate on Bill to Complete the Illinois and Michigan Canal, 26 February 18411
The bill for the early completion of the Illinois and Michigan canal was taken up.
Mr. Lincoln offered an amendment, allowing the State to pay in Bonds at par for all work hereafter done, and to issue therefor $3,000,000 bonds.
Mr. Bissell moved to strike out 3 and insert $1,500,000.
Mr. Lincoln accepted the amendment.
Messrs.[Messieurs] Lincoln and Dodge supported the bill, and Mr. Ormsbee and Kitchell opposed it.
Mr. Kitchell was surprised at the course of the gentleman from Sangamon (Mr. Lincoln.)—We were already prostrated by debt, and that gentlemen thought it would be for the interest of the State to go still deeper. Mr. K. said it reminded him of an anecdote, which he would relate. A drunkard in Arkansas took so much of the cretur, that he lost his reason and remained for some time in a state of insensibility. His wife tried every experiment to cure him; but it was of no avail, until a neighbor came to the house and recommended some brandy toddy. The insensible man rose at the word toddy, and said “that is the stuff.” It was so with the gentleman from Sangamon—more debt would be for the better.
Mr. Lincoln replied. He begged leave to tell an anecdote. The gentleman’s course the past winter reminded him of an eccentric old bachelor who lived in the Hoosier State. Like the gentlemon from Montgomery, he was very famous for seeing big bugaboos in every thing. He lived with an older brother, and one day he went out hunting. His brother heard him firing back of the field, and went out to see what was the matter. He found him loading and firing as fast as possible in the top of a tree.
Not being able to discover any thing in the tree, he asked him what he was firing at. He repled[replied] a squirrel—and kept on firing. His brother believing there was some humbug about the matter, examined his person, and found on one of his eye lashes a big louse crawling about. It was so with the gentleman from Montgomery. He imagined he could see squirrels every day, when they were nothing but lice.
(The House was convulsed with laughter.)
The [question?] was taken on agreeing to the amendments of Mr. Lincoln, and decided in the negative—yeas 41, nays 32.
The bill was then ordered to a third reading.
1This summary of the debate is from the Sangamo Journal, a Whig paper. Another comes from the Democratic Illinois State Register.
Illinois House Journal. 1840. 12th G. A., 518-20.

Report of Legislative Debate on Bill to Complete the Illinois and Michigan Canal. [1841-02-26]. /documents/D200270. The Papers of Abraham Lincoln Digital Library.