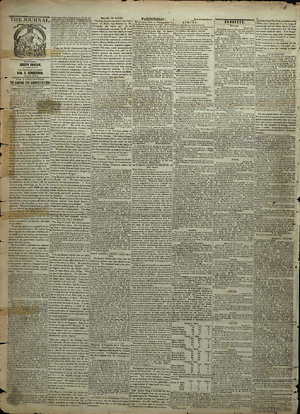 Proceedings of the Springfield Washington Temperance Society regarding the Death of Benjamin Ferguson, 8 February 1842
At a meeting of the Washington Temperance Society, held on Tuesday evening, Feb.[February] 8th, 1842,—after the meeting was called to order—A. Lincoln, Esq.[Esquire], rose and made the following remarks:
Mr. President: —The solemn duty has been assigned to me, of announcing to this Society, the sndden and melancholy death of its much respected member, BENJAMIN FERGUSON.
After an illness of only six days, he closed his mortal existence, at a quarter past seven on the evening of the 3d inst., in the bosom of his family at his residence in this city.
Mr. Ferguson was one who became a member of this society without any prospect of advantage to himself. He was, though not totally abstinent, strictly temperate before; and he espoused the cause solely with the hope and benevolent design of being able, by his efforts and example, to benefit others. Would to God, he had been longer spared to the humane work upon which he had so disinterestedly entered.
In his intercourse with his fellow men, he possessed that rare uprightness of character, which was evidenced by his having no disputes or bickerings of his own, while he was ever the chosen arbiter to settle those of his neighbors.
In very truth he was, the noblest work of God—an honest man.
The grateful task commonly vouchsafed to the mournful living, of casting the mantle of charitable forgetfulness over the faults of the lamented dead, is denied to us: for although it is much to say, for any of the erring family of man, we believe we may say, that he whom we deplore was faultless.
To Almighty God we commend him; and, in his name, implore the aid and protection, of his omnipotent right arm, for his bereaved and disconsolate family.
After which B. S. Edwards, Esq. offered the following resolutions which were unanimously adopted.
Resolved, That by the death of Mr. Benjamin Ferguson, this community has sustained the loss of a good man and an excellent citizen; and this society one of its most honored and useful members.
Resolved, That we as citizens of this community, and members of this Society, do sincerely and deeply regret the loss of this excellent man and take this opportunity to express our heartfelt sympathy with his bereaved family and friends.
Resolved, That the papers of this city be requested to publish these resolutions together with the remarks made by A Lincoln, Esq.
W. D. HERNDON, Pres.[President]W. Lavely, Secretary, pro. tem.

Proceedings of the Springfield Washington Temperance Society regarding the Death of Benjamin Ferguson. [1842-02-08]. /documents/D200291. The Papers of Abraham Lincoln Digital Library.