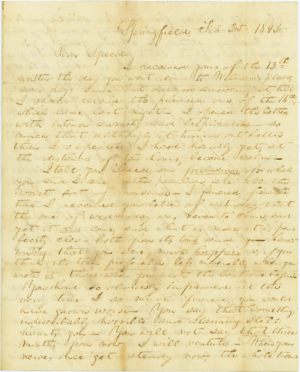 Abraham Lincoln to Joshua F. Speed, 25 February 18421
Springfield, Feb: 25— 1842—Dear Speed:2
I received yours of the 12th written the day you went down to William's place, some days since; but delayed answering it, till I should receive the promised one, of the 16th, which came last night—3 I opened the letter, with intense anxiety and trepidation—so much, that although it turned out better than I expected, I have hardly yet, at the distance of ten hours, become calm—
I tell you, Speed, our forebodings, for which you and I are rather peculiar, are all the worst sort of nonsense— I fancied, from the time I received your letter of saturday, that the one of wednesday was never to come; and yet it did come, and what is more, it is perfectly clear, both from it's tone and your handwriting, that you were much happier, or, if you think the term preferable, less miserable, when you wrote it, than when you wrote the last one before— You had so obviously improved, at the verry time I so much feared, you would have grown worse— You say that "something indescribably horrible and alarming still haunts you—["] You will not say that three months from now, I will venture— When your nerves once get steady now, the whole trou-
<Page 2>
ble will be over forever— Nor should you become impatient at their being even verry slow, in becoming steady— Again; you say you much fear that that Elysium of which you have dreamed so much, is never to be realized—4 Well, if it shall not, I dare swear, it will not be the fault of her who is now your wife— I now have no doubt that it is the peculiar misfortune of both you and me, to dreams dreams of Elysium far exceeding all that any thing earthly can realize. Far short of your dreams as you may be, no woman could do more to realize them, than that same black eyed Fanny— If you could but contemplate her through my immagination, it would appear ridiculous to you, that any one should for a moment think of being unhappy with her— My old Father used to have a saying that "If you make a bad bargain, hug it the tighter," and it occurs to me, that if the bargain you have just closed can possibly be called a bad one, it is certainly the most pleasant one for applying that maxim to, which my fancy can, by any effort, picture—
I write another letter enclosing this, which you can show her, if she desires it—5 I do this, because, she would think strangely perhaps, should you tell her that you receive
<Page 3>
no letters from me; or, telling her you do, should refuse to let her see them—
I close this, entertaining the confident hope, that every successive letter I shall have from you, (which I here pray may not be few, nor far between,) may show you possessing a m more steady hand, and cheerful heart, than the last preceding it—
As ever, your friend—Lincoln
1Abraham Lincoln wrote and signed this letter. It was enclosed within another letter to Speed.
2Sometime in 1840, Lincoln began courting Mary Todd, and the two broke up subsequently. Historians, and indeed onlookers at the time, have disagreed about the underlying cause, but suffice it to say that the breakup pushed Lincoln into a deep depression. Compounding this, in April, his close friend Joshua Speed moved home to Louisville, Kentucky, where he soon began courting Fanny Henning, who he married in February 1842. Sometime in 1842, Lincoln and Mary Todd renewed their courtship. From January 1842 until his own marriage in November 1842, Lincoln exchanged many letters with Speed mutually consoling and reassuring each other on the matter of their respective romances.
See Abraham Lincoln to Joshua F. Speed, Abraham Lincoln to Joshua F. Speed, Abraham Lincoln to Joshua F. Speed, Abraham Lincoln to Joshua F. Speed, Abraham Lincoln to Joshua F. Speed, Abraham Lincoln to Joshua F. Speed; Jean H. Baker, Mary Todd Lincoln: A Biography (New York: W. W. Norton, 1987), 85-86, 89-91, 93, 97; Interview of Ninian W. Edwards, 22 September 1865; Joshua F. Speed to William H. Herndon, 30 November 1866; Interview with Joshua F. Speed, [1866], Douglas L. Wilson and Rodney O. Davis, eds., Herndon’s Informants: Letters, Interviews, and Statements about Abraham Lincoln (Urbana: University of Illinois Press, 1998), 133, 430-31, 477.
3Neither of the letters from Speed mentioned here have been located.
4In Greek mythology, Elysium or Elysium Fields was the dwelling place of virtuous people after their deaths.
David Sacks, A Dictionary of Ancient Greek World (New York: Oxford University Press, 1995), 9.
5“—” written over “;”.