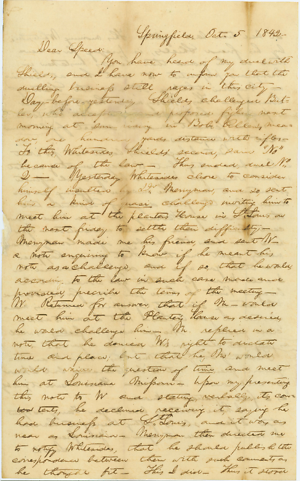 Abraham Lincoln to Joshua F. Speed, 5 October 18421
Springfield, Oct. 5 1842–Dear Speed:
You have heard of my duel with Shields, and I have now to inform you that the duelling business still rages in this city–2 Day-before-yesterday Shields challenged Butler, who accepted and proposed figh[t]ing next morning at sun-rising in Bob. Allen’s meadow, one hundred yards distance with rifles– To this, Whitesides, Shields’ second, said “No” because of the law–3 Thus ended, duel No 2– Yesterday, Whitesides chose to consider himself insulted by Dr Merryman, and so, sent him a kind of quasi challenge inviting him to meet him at the planter’s House in St Louis on the next friday to settle their difficulty–4 Merryman made me his friend, and sent W– a note enquiring to know if he meant his note as a challenge, and if so, that he would, according to the law in such case made and provided, pre[s]cribe the terms of the meeting– W. Returned for answer, that if M– would meet him at the Planter's House as desired, he would challenge him– M. replied in a note, that he denied W's right to dictate time and place; but that he, M' would would waive the question of time, and meet him at Louisiana Missouri– Upon my presenting this note to W. and stating, verbally, it’s contentents, he declined receiving it, saying he had business at St Louis, and it was as near as Louisiana– Merryman then directed me to notify Whitesides, that he should publish the correspondence between them with such comments as he thought fit– This I did–5 Thus it stood
<Page 2>
at bed time last night– This morning Whitesides, by his friend Shields, is praying for a new-trial on the ground that he was mistaken in Merrymans proposition to meet him at Louisiana Missouri thinking it was the State of Louisiana– This Merryman hoots at, and is preparing his publication–6 while the town is in a ferment and a street fight somewhat anticipated–
But I began this letter not for what I have been writing; but to say something on that subject which you know to be of such infinite solicitude to me– The immense suffering you endured from the first days of September till the middle of February you never tried to conceal from me, and I well understood–7 You have now been the husband of a lovely woman nearly eight months–8 That you are happier now than you were the day you married her I well know; for without, you would not be living– But I have your word for it too; and the returning elasticity of spirits which is manifested in your letters– But I want to ask a closer question– "Are you now, g in feeling as well as judgement, glad you are married as you are"?" From any body but me, this would be an impudent question not to be tolerated; but I know you will pardon it in me– Please answer it quickly as I feel impatient to know–9
I have sent my love to your Fanny so often that I fear she is getting tired of it; however I venture to tender it again–
Yours foreverLincoln
<Page 3>
SPRINGFIELD Il.[Illinois]
OCT[October] 6Mr Joshua F. SpeedSalina10Jefferson countyKentucky
[docketing]
[18?]
[docketing]
Oct 5, 42[1842]
[docketing]
c
1Abraham Lincoln authored the entirety of this letter, including the address on the last page, which was folded to create an envelope for mailing.
2Lincoln wrote a pseudonymous satirical editorial that was published in the Sangamo Journal on September 2, 1842, and which deeply offended Shields, the subject of the editorial. Shields’ offense and Lincoln’s response to it nearly resulted in a duel between the two men. John D. Whiteside served as Shields’ “second” and Elias H. Merryman served as Lincoln’s. On September 23, the parties traveled to Missouri, where duelling was not illegal, in order to conduct the fight, but their mutual friends effected a truce before the duel actually took place.
James Shields to Abraham Lincoln; Memorandum of Duel Instructions to Elias H. Merryman; Sangamo Journal (Springfield, IL), 7 October 1842, 2:5; 14 October 1842, 2:3-5.
3Duelling was illegal in Illinois. Challenging another to a duel resulted in disqualification from holding state office.
“An Act to Suppress Duelling,” 22 February 1819, Laws of Illinois (1819), 32-33.
4The Planter’s House Hotel opened in 1841 in downtown St. Louis.
J. Thomas Scharf, History of Saint Louis City and County (Philadelphia: Louis H. Everts, 1883), 2:1442.
5Abraham Lincoln to the Editor of the Sangamo Journal.
6Merryman’s account of his conflict with Whiteside was published in the Sangamo Journal on October 7.
Sangamo Journal (Springfield, IL), 7 October 1842, 2:6.
7Sometime in 1842, Lincoln and Mary Todd renewed their courtship. From January 1842 until his own marriage in November 1842, Lincoln exchanged many letters with Speed mutually consoling and reassuring each other on the matter of their respective romances.
Abraham Lincoln to Joshua F. Speed; Abraham Lincoln to Joshua F. Speed; Abraham Lincoln to Joshua F. Speed; Abraham Lincoln to Joshua F. Speed; Abraham Lincoln to Joshua F. Speed.
8Speed and Fanny Henning were married on February 15, 1842.
Robert L. Kincaid, Joshua Fry Speed: Lincoln’s Most Intimate Friend (Harrogate, TN: Lincoln Memorial University, 1943), 18.
9Lincoln and Mary Todd were married on November 4, 1842.
Marriage License for Abraham Lincoln and Mary Todd.
10No town called “Salina” could be identified in Jefferson Co., Kentucky.