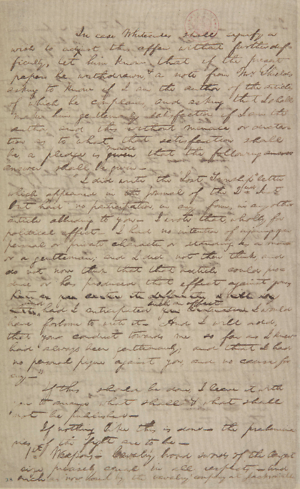 Memorandum of Duel Instructions to Elias H. Merryman, [19 September 1842]1
In case Whitesides shall signify a wish to adjust this affair without further difficulty, let him know that if the present papers be withdrawn, ^&^ a note from Mr Shields asking to know if I am the author of the articles of which he complains, and asking that I shall make him gentlemanly satisfaction, if I am the author, and this without menace, or dictation as to what that satisfaction shall be, a pledge is given ^made^, that the following ansre answer shall be given–
“I did write the “Lost Township” letter which appeared in the Journal of the 2nd Inst but had no participation, in any form, in any other article alluding to you–2 I wrote that, wholly for political effect– I had no intention of injuring your personal or private character or standing as a man or a gentleman; and I did not then think, and do not now think that that article could produce or has produced that effect against you– But, as you construe it differently, I will say that, ^and^ had I anticipated ^such an effect^ your consternation, I would have forborne to write it– And I will add, that your conduct towards me, so far as I knew, had always been gentlemanly; and that I had no personal pique against you, and no cause for any–”
If this should be done, I leave it with you to arrange what shall & what shall not be published–
If nothing like this is done– the preliminaries of the fight are to be–
1st Weapons– Cavalry broad swords of the largest size, precisely equal in all respects– And such as now used by the cavalry company at Jacksonville
<Page 2>
2nd Position– A plank ten feet long, & from nine to twelve inches broad to be firmly fixed on edge ^on the ground,^ as the line between us which neither is to pass his foot over upon forfeit of his life– Next a line drawn on the ground on either side of said plank & paralel with it, each at the distance of the whole length of the sword and three feet additional from the plank; and which lines the passing of his own such line by either party during the fight shall be deemed a surrender of the contest– The fight in no case to last more than fifteen minutes–
3– Time– On thursday evening at five o,clock if you can get it so; but in no case to ^be^ at a greater distance ^of time^ than friday evening at five o,clock–
4th Place– Within three miles of Alton on the opposite side of the river, the particular spot to be agreed on by you–3
Any preliminary details coming within the above ^rules,^ you are at liberty to make at your discretion; but you are in no case to swerve from the above ^ those these^ rules, or to pass beyond their limits–4
<Page 3>
[docketing]
Thomas S. Pinckard5
<Page 4>
[docketing]
No 4
1After exchanging a series of increasingly hostile letters with James Shields on September 17, Abraham Lincoln returned home to Springfield. In order to avoid an arrest for duelling, Lincoln soon left again, placing these instructions with Merryman. In their accounts of the story, both Merryman and Shields’ “second” John D. Whiteside stated that Lincoln wrote this document on September 19.
James Shields to Abraham Lincoln; Abraham Lincoln to James Shields; James Shields to Abraham Lincoln; Sangamo Journal (Springfield, IL), 7 October 1842, 2:5; 14 October 1842, 2:3-5.
2In 1838, the Sangamo Journal printed at least one anonymous letter from the “Lost Township,” the name of which alluded to political issues caused by the creation of new counties. In 1842, the concept was revived in a series of letters purporting to be from a woman named “Rebecca” from the Lost Townships. The first, dated August 10, 1842 and published on August 19, bemoaned the failure of the State Bank of Illinois and the subsequent depreciation of its printed paper money. The second letter from “Rebecca” was written by Abraham Lincoln on August 27 and published in the Journal on September 2. Two further letters from “Rebecca” appeared in the Journal on September 9.
Sangamo Journal (Springfield, IL), 9 September 1842, 2:5, 3:1.
3Duelling was illegal in Illinois, but legal in Missouri.
4Whiteside and Merryman were unable to effect a compromise, and all the parties convened in Alton on September 22. After crossing the river to Missouri, additional mutual friends were able to bring about a truce between Shields and Lincoln, and the duel was averted.
Sangamo Journal (Springfield, IL), 7 October 1842, 2:5; 14 October 1842, 2:3-5.
5On March 13, 1862, Thomas S. Pinckard of Alton, Illinois, wrote to Lincoln’s secretary John G. Nicolay, enclosing the manuscript of the duel instructions in Lincoln’s handwriting. Pinckard had found the manuscript in a loft above the office of the Illinois State Journal newspaper in Springfield. He asked Nicolay to show the document to Lincoln: “it may provoke a smile or perhaps a relation of the events to which it relates.”
Thomas S. Pinckard to John G. Nicolay.