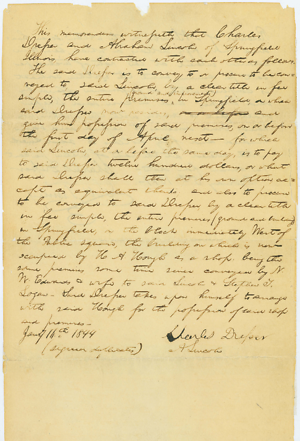 Contract between Charles Dresser and Abraham Lincoln, 16 January 18441
This memorandum witnesseth that Charles Dresser and Abraham Lincoln of Springfield Illinois, have contracted with each other as follows.
The said Dresser is to convey to, or procure to be conveyed to, said Lincoln, by a clear title in fee simple, the entire premises ^(ground and improvements)^ in Springfield, on which said Dresser now resides, on or before and give him possession of said premises, on or before the first day of April next–2 for which said Lincoln, at or before the same day, is to pay to said Dresser twelve hundred dollars, or what said Dresser shall then at his own option, accept as equivalent thereto; and also to procure to be conveyed to said Dresser, by a clear title in fee simple, the entire premises (ground and building) in Springfield, on the block immediately West of the Public square, the building on which is now occupied by H. A. Hough as a shop, being the same premises, some time since conveyed by N. W. Edwards & wife to said Lincoln & Stephen T. Logan– Said Dresser takes upon himself to arrange with said Hough for the possession of said shop and premises–
Jany 16.th 1844Charles DresserA Lincoln
(signed duplicates)
<Page 2>
[endorsement]
02/05/1844
Dresser, CharlesTinsley, Seth M.
Received of A Lincoln on the within seven hundred and fifty dollars, on which he is to be allowed interest at the rate of twelve per cent per annum, until the within contract is complied with, or performance offered by said Dresser; and in case said Dresser shall fail to comply with the within, we hereby bind ourselves to refund said seven hundred and fifty dollars to said Lincoln with interest at the rate of twelve per cent per annum from date–
February 5th 1844–Charles DresserS. M. Tinsley
1Abraham Lincoln wrote and signed the deed, which Charles Dresser also signed. Lincoln also authored the endorsement, which was signed by Dresser and Seth M. Tinsley.
2On May 2, 1844, Dresser and his wife conveyed the lot to Lincoln. Lincoln and his family lived in the home until he was elected president and moved to Washington, DC, on February 11, 1861. It was the only home Lincoln ever owned.
Deed of Charles Dresser and Louisa W. Dresser to Abraham Lincoln; The Lincoln Log: A Daily Chronology of the Life of Abraham Lincoln, 11 February 1861, http://www.thelincolnlog.org/Results.aspx?type=CalendarDay&day=1861-02-11.