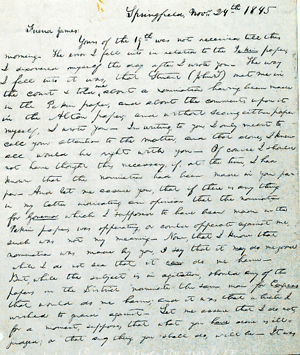 Abraham Lincoln to Benjamin F. James, 24 November 18451
Springfield, Novr 24th 1845Friend James:
Yours of the 19th was not received till this morning–2 The error I fell into in relation to the Pekin paper, I discovered myself the day after I wrote you– The way I fell into it was, that Stuart (John T) met me in the court & told ^me^ about a nomination having been made in the Pekin paper, and about the comments upon it in the Alton paper; and without seeing either paper myself, I wrote you– In writing to you, I only meant to call your attention to the matter; and that done, I knew all would be right with you– Of course I should not have thought this necessary, if, at the time, I had known that the nomination had been made in your paper–3 And let me assure you, that if there is any thing in my letter indicating an opinion that the nomination for Governor, which I supposed to have been made in the Pekin paper, was opperating, or could opperate against me, such was not my meaning– Now, that I know that nomination was made by you, I say that it may do me good while I do not see that it can do me harm–
But, while the subject is in agitation, should any of the papers in the District nominate the same man for Congress that would do me harm; and it was that which I wished to guard against– Let me assure that I do not, for a moment, suppose, that what you have done is ill-judged; or that any thing you shall do, will be– It was
<Page 2>
to object to the course of the Pekin paper (as I then thought it) but to guard against any falling into the wake of the Alton paper, that I wrote–
You, perhaps, have noticed the Journal's article of last week, upon the same subject–4 It was written without any consultation with me, but I was told by Francis of it's purport before it was published– I chose to let it go as it ^was,^ want, lest it should be suspected that I was attempting to juggle ^Hardin^ out of a nomination for congress by juggleing him [out?] into one for Governor– If you, and the other papers, a little more distant from me, choose, to take the same course you have, of course I have no objection– After you shall have received this, I think we shall fully understand each other, and that our views as to the effects of these things are not dissimilar– Confidential of course
Yours as everA. Lincoln
1Abraham Lincoln wrote and signed the letter.
2Benjamin F. James’ November 19 letter to Lincoln has not been located. For Lincoln’s previous letter to James, see Abraham Lincoln to Benjamin F. James.
3 The Pekin paper that Lincoln references has not been identified.
James’ own newspaper, the Tazewell Whig, proclaimed John J. Hardin for governor in at least three November issues. On November 15, the Alton Telegraph and Democratic Review noted that the Tremont paper had put forth Hardin’s name for governor. It implied first-hand knowledge that Hardin would not run for governor, and posited that while no Whig could win statewide office, the congressional race would be an opportunity with a greater chance of success.
The Tazewell Whig (Tremont, IL), 1 November 1845, 2:1; 8 November 1845, 2:1; 15 November 1845, 2:1; Alton Telegraph and Democratic Review (IL), 15 November 1845, 2:3.
4Here, Lincoln is referring to the November 20, 1845 edition of the Sangamo Journal, of which there is no extant copy.