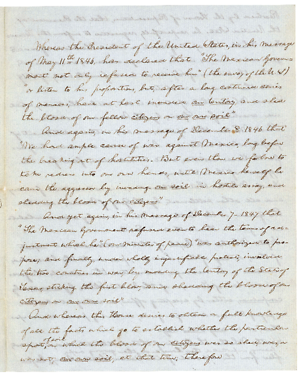 ‘‘Spot’’ Resolutions in the United States House of Representatives, 22 December 18471
Whereas the President of the United States, in his message of May 11th 1846, has declared that “The Mexican Government not only refused to receive him” (the envoy of the U.S) “or listen to his propositions, but, after a long continued series of menaces, have at last invaded our teritory, and shed the blood of our fellow citizens on our own soil”2
And again, in his message of December 8. 1846 that “We had ample cause of war against Mexico, long before the breaking out of hostilities– But even then we forbore to take redress into our own hands, until Mexico herself became the aggressor by invading our soil in hostile array, and shedding the blood of our citizens”3
And yet again, in his message of December 7– 1847 that “The Mexican Government refused even to hear the terms of adjustment which he” (our minister of peace) “was authorized to propose; and finally, under wholly unjustifiable pretexts, involved the two countries in war, by invading the teritory of the State of Texas, striking the first blow, and shedding the blood of our citizens on our own soil”4
And whereas this House desires to obtain a full knowledge of all the facts which go to establish whether the particular spot ^of soil^ on which the blood of our citizens was so shed, was, or was not, our own soil, at that time; therefore

<Page 2>
Resolved by the House of Representatives, that the President of the United States be respectfully requested to inform this House:
First: Whether the spot of soil on which the blood of our citizens was shed, as in his messages declared, was, or was not, within the teritories of Spain, at least from the treaty of 1819 until the Mexican revolution5
Second: Whether that spot is, or is not, within the teritory which was wrested from Spain, by the Mexican revolution–
Third: Whether that spot is, or is not, within a settlement of people, which settlement had existed ever since long before the Texas revolution, until it’s inhabitants fled from the approach of the U S. Army–
Fourth: Whether that settlement is, or is not, isolated from any and all other settlements, by the Gulf of Mexico, and the Rio Grande, on the South and West, and by wide uninhabited regions on the North and East–
Fifth: Whether the People of that settlement, or a majority of them, or any of them, had ever, previous to the bloodshed, mentioned in his messages, submitted themselves to the government or laws of Texas, or of the United States, by consent, or by compulsion, either by accepting office, or voting at elections, or paying taxes, or serving on juries, or having process served upon them, or in any other way–
Sixth: Whether the People of that settlement, did, or did not, flee from the approach of the United States Army, ^leaving, unprotected their homes and their growing crops,^ before
<Page 3>
the blood was shed, as in his messages stated; and whether the first blood so shed, was, or was not shed, within the enclosure of the People, or some of them, who had thus fled from it–
Seventh: Whether our citizens, whose blood was shed, as in his messages declared, were, or were not, at that time, armed officers, and soldiers, sent into that settlement, by the military order of the President through the Secretary of War– and
Eighth: Whether the military force of the United States, including those citizens, was, or was not, so sent into that settlement, after Genl Taylor had, more than once, intimated to the War Department that, in his opinion, no such movement was necessary to the defence or protection of Texas–
<Page 4>
[docketing]
December 22 1847
Mr Lincoln
Mexican War
[docketing]
Lincoln 32.
lie over 1 day rule
[docketing]
Laid over one day under the rule6
1Aside from the docketing on page four, this document was written entirely by Abraham Lincoln. Lincoln’s handwritten version differs from a printed version preserved at the Library of Congress and from a printed version in the Congressional Globe. Some of Lincoln’s words and phases from his handwritten version did not find their way into the printed versions.
2James K. Polk to the Senate and House of Representatives, 11 May 1846, U.S. House Journal. 1846. 29th Cong., 1st sess., 784-89.
3James K. Polk to the Senate and House of Representatives, 8 December 1846, U.S. House Journal. 29th Cong., 2nd sess., 11-42.
4James K. Polk to the Senate and House of Representatives, 7 December 1847, U.S. House Journal. 1848. 30th Cong., 1st sess., 19-51.
5Mexico declared its independence from Spain on February 24, 1821.
Timothy J. Henderson, A Glorious Defeat: Mexico and Its War with the United States (New York: Hill and Wang, 2007), 21.
6The U.S. House of Representatives did not act on Lincoln’s resolutions.
Lincoln was only two weeks into his term as a member of the U.S. House. In a letter to William H. Herndon on December 13, Lincoln noted that Herndon and others wanted him to “distinguish” himself, so Lincoln decided to distinguish himself from his peers by wading into the dispute over President James K. Polk’s justification for the Mexican War. Lincoln followed up these “Spot Resolutions” with a speech on January 12, 1848, attacking Polk’s justification for the war.
Michael Burlingame, Abraham Lincoln: A Life (Baltimore: The Johns Hopkins University Press, 2008), 1:264-65.