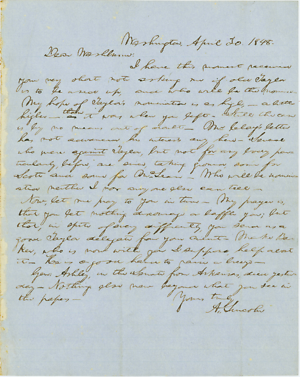 Abraham Lincoln to Elihu B. Washburne, 30 April 18481
Washington, April 30. 1848–Dear Washburne:
I have this moment received your very short note asking me if old Taylor is to be used up, and who will be the nominee–2 My hope of Taylor's nomination is as high, —a little higher—as ^than^ it was when you left–3 Still the case is by no means out of doubt– Mr Clay's letter has not advanced his interests any here– Several who were against Taylor, but not for any body particularly, before, are since, taking ground, some for Scott and some for McLean– Who will be nominated neither I nor any one else can tell–4
Now, let me pray to you in turn– My prayer is, that you let nothing discourage or baffle you; but that, in spite of every difficulty, you send us a good Taylor delegate from your circuit– Make Baker, who is now with you I suppose, help about it– He is a good hand to raise a breeze–5
Gen: Ashley, in the Senate from Arkansas, died yesterday– Nothing else new beyond what you see in the papers–
Yours trulyA. Lincoln
1Abraham Lincoln wrote and signed this letter.
2Elihu B. Washburne’s “short note” has not been located. Lincoln references the movement to draft Zachary Taylor as the Whig Party’s candidate in the presidential election of 1848.
3Elihu B. Washburne had been in Washington, DC lobbying the House of Representatives Committee on Claims on behalf of a legal client.
Mark Wasburne, A Biography of Elihu Benjamin Washburne: Congressman, Secretary of State, Envoy Extraordinary (Philadelphia, Xlibris, 2000), 1:218.
4Lincoln had been actively working to advance Taylor’s candidacy as a member of the so-called “Young Indians,” a Whig Executive Committee founded by Truman Smith in the spring of 1847 to provide the Whig Party with a unified national organization for the imminent presidential campaign. Including principally but not exclusively Southern Whigs, the Young Indians made it their goal to nominate Zachary Taylor as the Whig Party standard bearer in 1848.
Some Whigs condemned the movement for Taylor, a southern slaveholder who had no previous political affiliation, as an abandonment of Whig principles. Taylor’s insistence on an independent candidacy, independent of party, further eroded his following among the party faithful, allowing Winfield Scott, John McLean, and other candidates to get attention. This included Henry Clay, the party’s standard bearer in the 1844 election and was still the nominal head of the party. To dispel rumors that he was withdrawing from the race, Clay released a public letter--the letter Lincoln references--announcing his intention to allow the upcoming Whig National Convention to consider him as a candidate. Written on April 10 and distributed to Lexington, Kentucky newspapers on April 12 and major eastern newspapers the next day, Clay’s letter incensed Taylor’s followers, prompting them to urge him to issue a statement affirming his commitment to Whig principles.
Michael Burlingame, Abraham Lincoln: A Life (Baltimore: The Johns Hopkins University Press, 2008), 1:275-76; Holman Hamilton, Zachary Taylor: Soldier in the White House (Hamden, CT: Archon, 1966), 63-64; Michael F. Holt, The Rise and Fall of the American Whig Party: Jacksonian Politics and the Onset of the Civil War (New York: Oxford University Press, 1999), 309-30, 333-39; K. Jack Bauer, Zachary Taylor: Soldier, Planter, Statesman of the Old Southwest (Baton Rouge: Louisiana State University Press, 1985), 233-34; Henry Clay to the Public, 10 April 1848, Melba Porter Hay and Carol Reardon, eds., The Papers of Henry Clay (Lexington: The University Press of Kentucky, 1991), 10:430-31.
5An early supporter of Taylor, Washburne had been working to secure Taylor delegates for the Whig National Convention, to be held in Philadelphia on June 7-9. On June 9, the convention nominated Taylor as the party’s candidate for president.
Michael F. Holt, The Rise and Fall of the American Whig Party: Jacksonian Politics and the Onset of the Civil War, 288, 320-26, 329; Mark Wasburne, A Biography of Elihu Benjamin Washburne: Congressman, Secretary of State, Envoy Extraordinary, 1:217-18; Abraham Lincoln to Simeon Francis.