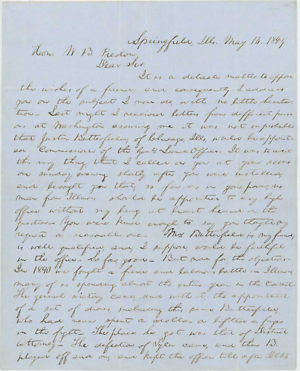 Recipient(s):
Preston, William B. (Secretary of the Navy)

Abraham Lincoln to William B. Preston, 16 May 18491
Springfield, Ills. May 16– 1849Hon: W B. Preston:Dear Sir:
It is a delicate matter to oppose the wishes of a friend; and consequently I address you on the subject I now do, with no little hesitation– Last night I received letters from different persons at Washington assuring me it was not improbable that Justin Butterfield, of Chicago, Ills, would be appointed Commissioner of the Genl Land Office– It was to avert this very thing, that I called on you at your rooms one sunday evening shortly after you were installed, and besought you that, so far as in your power, no man from Illinois should be appointed to any high office without my being at least heard on the question– You were kind enough to say you thought my request a reasonable one– Mr Butterfield is my friend, is well qualified, and, I suppose, would be faithful in the office– So far, good– But now for the objections– In 1840 we fought a fierce and laborious battle in Illinois, many of us spending almost the entire year in the contest– The general victory came, and with it, the appointment of a set of drones, including this same Butterfield, who had never spent a dollar or lifted a finger in the fight– The place he got was that of District Attorney– The defection of Tyler came, and then B. played off and on, and kept the office till after Polk's
<Page 2>
election–2 Again, winter and spring before the last, when you and I were almost sweating blood to have Genl Taylor nominated, this same man was ridiculing the idea, and going for Mr Clay; and when Gen. T. was nominated, if he went out of the City of Chicago to aid in his election, it is more than I ever heard, or believe–3 Yet, when the election is secured, by other men's labor, and even against his effort, why, he is the first man on hand for the best office that our state lays any claim to– Shall this thing be? Our whigs will throw down their arms, and fight no more, if the fruit of their labor is thus disposed of– If there is one man in this state who desires B's appointment to any thing, I declare I have not heard of him– What influence opperates for him, I can not conceive– Your position makes it a matter of peculiar interest to you, that the administration shall be successful; and be assured, nothing can more endanger it, than making appointments through old-hunker-foreign influences, which offend, rather than gratify, the people immediately interested in the offices–
Can you not find time to write me, even half as long a letter as this? I shall be much gratified if you will–4
Your obt Servt[obedient Servant]A. Lincoln
<Page 3>
<Page 4>
SPRINGFIELD [Ills?]
MAY 18
FREE
Hon: W. B PrestonSec.[Secretary] NavyWashingtonD.C.
[docketing]
05/16/1849
A. Lincoln
Relative to appointments from Illinois– J. Butterfield–
May 16, 1849.
1Abraham Lincoln wrote and signed this letter, including the address on the fourth sheet, which was folded to create an envelope. The docketing on the fourth sheet is in another hand.
2In May 1841, Justin H. Butterfield received appointment as district attorney of the District of Illinois. He retained the job until January 1845.
Sangamo Journal (Springfield, IL), 7 May 1841, 2:7; 2 January 1845, 3:4; Register of all Officers and Agents, Civil, Military, and Naval, in the Service of the United States, from the Thirtieth September, 1841, to the Thirtieth September, 1843 (Washington, DC: J. & G. S. Gideon, 1843), 257.
3Reference to Lincoln’s and Butterfield’s respective activities in the presidential election of 1848.
4William B. Preston’s response, if he penned one, has not been located.
Butterfield, James L. D. Morrison, and Cyrus Edwards were vying to replace Richard M. Young as commissioner of the U.S. General Land Office. Lincoln would also eventually become a candidate for the job. Neither Morrison, Edwards, nor Lincoln received the appointment, the job going to Butterfield instead. See the General Land Office Affair.