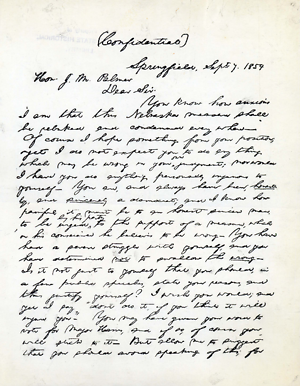 Abraham Lincoln to John M. Palmer, 7 September 18541
(Confidential)
Springfield, Sept 7. 1854Hon. J. M. PalmerDear Sir.
You know how anxious I am that this Nebraska measure shall be rebuked and condemned every where–2 Of course I hope something from your position; yet I do not expect you to do any thing which may be wrong in your ^own^ judgment; nor would I have you do anything personally injurious to yourself– You are, and always have been, honestly, and sincerely a democrat; and I know how painful it must be to an honest sincere man, to be urged ^by his party^ to the support of a measure, which on his conscience he believes to be wrong– You have had a severe struggle with yourself, and you have determined not to swallow the wrong– Is it not just to yourself that you should, in a few public speeches, state your reasons, and thus justify yourself?3 I wish you would; and yet I say “dont do it, if you think it will injure you”– You may have given your word to vote for Major Harris, and if so, of course you will stick to it– But allow me to suggest that you should avoid speaking of this; for
<Page 2>
it probably would induce some of your friends, in like manner, to cast their votes– You understand– And now let me beg your pardon for obtruding this letter upon you, to whom I have ever been opposed in politics– Had your party omitted to make Nebraska a test of party fidelity; you probably would have been the Democratic candidate for congress in the district– You deserved it, and I believe it would have been given you– In that case I should I should have been quit, happy that Nebraska was to be rebuked at all events– I still should have voted for the whig candidate; but I should have made no speeches, written no letters; and you would have been elected by at least a thousand majority–4
Yours trulyA. Lincoln–
1Abraham Lincoln wrote and signed this letter.
2Passage of the Kansas-Nebraska Act and the repeal of the Missouri Compromise spurred Lincoln, who had taken a hiatus from politics after his term in the U.S. House of Representatives, to reenter politics. He threw himself into opposing the act, crisscrossing Illinois to deliver speeches against the legislation and to rebut Stephen A. Douglas’ views on popular sovereignty. In the congressional elections of 1854, Lincoln campaigned for the Richard Yates and other anti-Nebraska candidates running for the U.S. House of Representatives. Yates, a Whig, was seeking reelection as representative for the Sixth Illinois Congressional District. See 1854 Federal Election.
David Herbert Donald, Lincoln (New York: Simon & Schuster, 1995), 167-73; Autobiography of Abraham Lincoln Written for John L. Scripps.
3Lincoln wrote a letter of this same date to Alexander B. Morean of Jerseyville proposing anti-Nebraska Democratic state senator John M. Palmer as a possible speaker in place of Yates at the meeting of the Jersey County Circuit Court the following week. Yates’s congressional opponent, Democrat Thomas L. Harris, was scheduled to appear in Jerseyville but neither Lincoln nor Yates was available to speak in rebuttal. Lincoln had speaking and court engagements in Bloomington the same week and Yates had a case at Pike County Circuit Court.
The Lincoln Log: A Daily Chronology of the Life of Abraham Lincoln, 12 September 1854, http://www.thelincolnlog.org/Results.aspx?type=CalendarDay&day=1854-09-12; 16 September 1854, http://www.thelincolnlog.org/Results.aspx?type=CalendarDay&day=1854-09-16.
4Palmer appeared in Jersey County on September 28, speaking against the Kansas-Nebraska Act and in support of temperance in opposition to fellow Democrat Beatty B. Burke, Palmer’s pro-Nebraska opponent in the contest for the Illinois Senate. Palmer would defeat Burke in the general election in November.
Despite Lincoln’s efforts on his behalf, Yates did not retain his seat, losing to Harris in the general election by 200 votes. Harris garnered 50.5 percent of the vote to Yates’ 49.5 percent.
Illinois Daily Journal (Springfield), 28 September 1854, 2:1; 2 January 1855, 2:3; Howard W. Allen and Vincent A. Lacey, eds., Illinois Elections, 1818-1990 (Carbondale and Edwardsville: Southern Illinois University Press, 1992), 10.