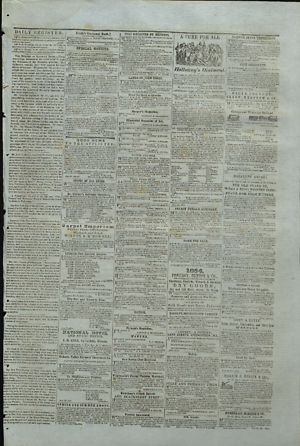 Summary of Speech at Springfield, Illinois, 9 September 18541
The meeting on Saturday Night.— There was a large audience at the court house to hear the discussion of the Nebraska question.2
Mr. Calhoun’s remarks were fully equal to his best efforts of the past.3 He presented the question in a light that none could misunderstand, and for cogent reasoning, sound argument, and fair dealing with facts involved in the question, we have never heard the question better elucidated. At the close of his remarks he spoke of the Know Nothing organization; their designs, and their tendency to whigery, which could not fail to have convinced his hearers of the party character of this secret organization.
Mr. Lincoln replied to Mr. C., and, with his usual ability, made the best of a bad position. We have never heard him when more at fault in covering up the heresies which he habitually takes to. The whole tenor of his discussion was to satisfy the whig portion of his audience that affiliation with abolitionism was the only salvation of their party, and (Heaven save the mark!) of the country! He knew nothing of the secret institution of which Mr. Calhoun spoke, and, like the Journal, even “doubted its existence.4 Of course he did. He “Knows Nothing” about it.
The result of the debate, we are satisfied, was to convince the audience of the fallacy of the present abolition outcry, and the correctness of the policy of leaving to the people of the territories the adjustment of their own domestic affairs; a privilege which we, as Illinoisans, claim for ourselves, and which we cannot, in justice, deny to others of our fellow countrymen.5
1This summary appeared in the September 11, 1854, issue of the Democratic newspaper Illinois State Register.
2The “Nebraska Question” refers to the Kansas-Nebraska Act, the passage of which caused much contention in the Northern states. See Kansas-Nebraska Act; 1854 Federal Election.
3Richard Yates had defeated John Calhoun for a congressional seat to represent the Illinois Sixth Congressional District in the congressional election of 1852.
William Jayne, “Richard Yates’ Services to Illinois as War Governor,” Transactions of the Illinois State Historical Society 7 (1902), 144; Howard W. Allen and Vincent A. Lacey, eds., Illinois Elections, 1818-1990 (Carbondale and Edwardsville: Southern Illinois University Press, 1992), 9.
4The September 6, 1854, issue of the Illinois State Journal wrote of the Know Nothings: “We know nothing of such a society. In fact we seriously doubt its very existence.”
Illinois Daily Journal (Springfield), 6 September 1854, 2:3.
5The Kansas-Nebraska Act established the principle of popular sovereignty, leaving the inhabitants of each territory to decide the slave status of the new state.
Passage of the Kansas-Nebraska Act and its effective repeal of the Missouri Compromise reawakened Lincoln’s passion for politics, and he threw himself into the congressional election campaign in the fall of 1854, crisscrossing the state to deliver speeches against the legislation and in support of anti-Nebraska candidates. See 1854 Federal Election.
On September 11, 1854, the Illinois State Journal printed an editorial on Kansas-Nebraska Act which appears to continue the debate between Lincoln and Calhoun. Given the editorial’s content, Lincoln was most likely the author.
David Herbert Donald, Lincoln (New York: Simon & Schuster, 1995), 167-73; Autobiography of Abraham Lincoln Written for John L. Scripps; Roy P. Basler, ed., The Collected Works of Abraham Lincoln (New Brunswick, NJ: Rutgers University Press, 1953), 2:230.