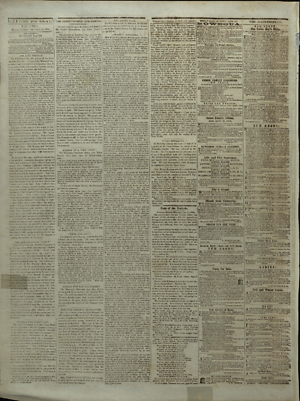 Editorial on the Kansas-Nebraska Act, 11 September 18541
THE 14TH SECTION.
The following is the 14th section of the Kansas-Nebraska law. It repeals the Missouri Compromise; and then puts in a declaration that it is not intended by this repeal to legislate slavery in or exclude it therefrom, the territory.
Sec.[Section] 14. That the constitution, and all the laws of the United States which are not locally inapplicable, shall have the same force and effect within said territory of Nebraska as elsewhere in the United States, except the 8th section of the act preparatory to the admission of Missouri into the Union, approved March sixth, eighteen hundred and twenty, which being inconsistent with the principles of non-intervention by congress with slavery in the States and Territories as recognized by the legislation of eighteen hundred and fifty, commonly called the compromise measures, is hereby declared inoperative and void; it being the true intent and meaning of this act not to legislate slavery into any territory or State, nor to exclude it therefrom, but to leave the people thereof perfectly free to form and regulate their domestic institutions in their own way, subject only to the constitution of the United States: Provided, that nothing herein contained shall be construed to revive or put in force any law or regulation which may have existed prior to the act of sixth of March, eighteen hundred and twenty, either protecting, establishing, prohibiting, or abolishing slavery.”2
The state of the case in a few words, is this: The Missouri Compromise excluded slavery from the Kansas-Nebraska territory. The repeal opened the territories to slavery. If there is any meaning to the declaration in the 14th section, that it does not mean to legislate slavery into the territories, is this: that it does not require slaves to be sent there. The Kansas and Nebraska territories are now as open to slavery as Mississippi or Arkansas were when they were territories.
To illustrate the case— Abraham Lincoln has a fine meadow, containing beautiful springs of water, and well fenced, which John Calhoun had agreed with Abraham (originally owning the land in common) should be his, and the agreement had been consummated in the most solemn manner, regarded by both as sacred John Calhoun, however, in the course of time, had become owner of an extensive herd of cattle— the prairie grass had become dried up and there was no convenient water to be had. John Calhoun then looks with a longing eye on Lincoln’s meadow, and goes to it and throws down the fences, and exposes it to the ravages of his starving and famishing cattle. “You rascal,” says Lincoln, “what have you done? what do you do this for?”— “Oh,” replies Calhoun, “everything is right. I have taken down your fence; but nothing more. It is my true intent and meaning not to drive my cattle into your meadow, nor to exclude them therefrom, but to leave them perfectly free to form their own notions of the feed, and to direct their movements in their own way!”
Now would not the man who committed this outrage be deemed both a knave and a fool,— a knave in removing the restrictive fence, which he had solemnly pledged himself to sustain;— and a fool in supposing that there could be one man found in the country to believe that he had not pulled down the fence for the purpose of opening the meadow for his cattle?3
1Although unsigned, the content of this editorial appears to continue the debate between Abraham Lincoln and John Calhoun of September 9, 1854. It is therefore highly likely that Lincoln was the author.
Roy P. Basler, ed., The Collected Works of Abraham Lincoln (New Brunswick, NJ: Rutgers University Press, 1953), 2:230.
2Section eight of the Missouri Compromise reads, “And be it further enacted, That in all that territory ceded by France to the United States, under the name of Louisiana, which lies north of thirty-six degrees and thirty minutes north latitude, not included within the limits of the state, contemplated by this act, slavery and involuntary servitude, otherwise than in the punishment of crimes, whereof the parties shall have been duly convicted, shall be, and is hereby, forever prohibited: Provided always, That any person escaping into the same, from whom labour or service is lawfully claimed, in any state or territory of the United States, such fugitive may be lawfully reclaimed and conveyed to the person claiming his or her labour or service as aforesaid.”
“An Act to Authorize the People of the Missouri Territory to Form a Constitution and State Government, and for the Admission of such State into the Union on an Equal Footing with the Original States, and to Prohibit Slavery in Certain Territories,” 6 March 1820, Statutes at Large of the United States 3 (1846):548.
3Passage of the Kansas-Nebraska Act and its effective repeal of the Missouri Compromise reawakened Lincoln’s passion for politics, and he threw himself into opposing the act, crisscrossing Illinois to deliver speeches against the legislation and to rebut Stephen A. Douglas’ views on popular sovereignty. Lincoln also spoke in support of anti-Nebraska candidates running for the U.S. House of Representatives in the 1854 congressional election. See 1854 Federal Election.
David Herbert Donald, Lincoln (New York: Simon & Schuster, 1995), 167-73; Autobiography of Abraham Lincoln Written for John L. Scripps.