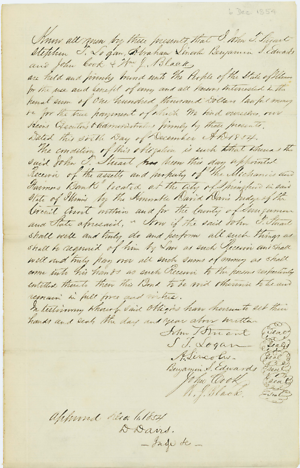 Bond for John T. Stuart, 6 December 18541
Know all men by these presents that I, John T. Stuart Stephen T. Logan, Abraham Lincoln Benjamin S. Edwards and John Cook & Wm J. Black2
are held and firmly bound unto The People of the State of Illinois for the use and benefit of any and all persons interested in the penal sum of one hundred thousand Dollars lawful money &c[etc.] for the true payment of which We find ourselves, our Heirs Executors & Administrators firmly by these presents. Dated this sixth Day of December AD 1854.
The condition of this obligation is such that whereas the said John T. Stuart has been this day appointed Receiver of the assetts and property of "The Mechanics and Farmers Bank" located at the city of Springfield in said State of Illinois by the Honorable David Davis Judge of the Circuit Court within and for the County of Sangamon and State aforesaid,3 Now if the said John T. Stuart shall well and truly do and perform all such things as shall be required of him by Law as such Receiver and shall well and truly pay over all such sums of money as shall come into his hands as such Receiver to the persons respectively entitled thereto then this Bond to be void otherwise to be and remain in full force and virtue.4
In testimony whereof said obligors have hereunto set their hands and seals the day and year above written5
John T Stuart  seal S T. Logan  seal A. Lincoln–  seal Benjamin S. Edwards  seal John Cook  seal W. J. Black6.  seal
[endorsement]
12/06/1854
Davis, David
Approved
Dec. 6, 18547D Davis.
Judge &c8
[docketing]
12/06/1854
Matheny, James H. (Matheany, Matheney)
Filed Decr 6, 1854Jas Matheny clerk9
1An unknown person wrote the body of this document.
2Benjamin S. Edwards, John C. Cook, and William J. Black each wrote their own names in this paragraph. An unknown person wrote the names of John T. Stuart, Stephen T. Logan, and Abraham Lincoln.
3In American law, a receiver is an impartial person appointed by the court to collect and receive money or assets on behalf of an incompetent party.
Henry Campbell Black, A Dictionary of Law (St. Paul, MN: West, 1891), 1000.
4By signing this bond, Logan, Lincoln, Edwards, Cook, and Black agreed to be sureties—parties who assumed responsibility if Stuart defaulted on his duties as court-appointed receiver for the Mechanics and Farmers Bank.
Henry Campbell Black, A Dictionary of Law, 1142.
5This bond, and Stuart’s appointment as receiver, are related to the case Campbell v. Lewis et al., which was tried in the Sangamon County Circuit Court between March 1855 and November 1856.
In the case, Thomas Lewis, president of the Mechanics and Farmers Bank, deposited $51,500 in bonds with Thomas H. Campbell, Illinois’ state auditor, in the fall of 1852 in exchange for circulating bank notes. On November 22, 1854, the bank closed for business, still owing funds to its depositors, stockholders, and possessors of its bank notes. On December 4, 1854, Campbell notified Lewis that he had received a complaint that a $1.00 bank note had not been paid. Campbell retained Lincoln, Antrim Campbell, Benjamin S. Edwards, and William H. Herndon, and sued Lewis and the bank’s other stockholders to petition the court to appoint a receiver to take control of the bank’s assets. Judge David Davis appointed Stuart receiver for the bank. After reviewing the bank’s financial records, Stuart reported that the bank possessed $70,882.29 in assets which could be divided among its creditors. Stuart worked toward reconciling accounts between the bank and its creditors well into 1858.
Letter, Document ID: 76567, Campbell v. Lewis et al., Martha L. Benner and Cullom Davis et al., eds., The Law Practice of Abraham Lincoln: Complete Documentary Edition, 2d edition (Springfield: Illinois Historic Preservation Agency, 2009), http://www.lawpracticeofabrahamlincoln.org/Details.aspx?case=138435; Illinois Daily Journal (Springfield), 30 October 1852, 3:2; 22 November 1854, 2:1.
6Stuart, Logan, Lincoln, Edwards, Cook, and Black all signed their own names.
7An unknown person wrote this endorsement.
8Davis signed his own name and wrote this script.
9James H. Matheny wrote this docketing and signed his own name.