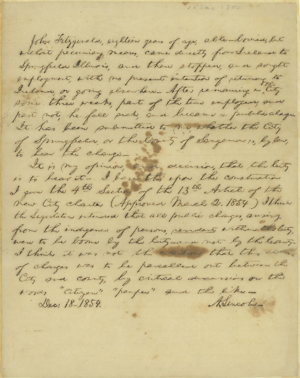 Opinion Regarding John Fitzgerald, 18 December 18541
John Fitzgerald, eighteen years of age, able-bodied, but without pecuniary means, came directly from Ireland to Springfield Illinois, and there stopped, and sought employment, with no present intention of returning to Ireland, or going elsewhere– After remaining in ^the^ City some three weeks, part of the time employed, and part not, he fell sick, and became a public charge– It has been submitted to me, whether the City of Springfield, or the County of Sangamon is, by law, to bear the charge–2
It is my opinion, and decision, that the City is to bear it– I base this upon the construction I give the 4th Section of the 13th Article of the New City charter (Approved March 2, 1854) I think the Legislature intended that all public charges, arising from the indigence of persons, resident within the City, were to be borne by the City— and not by the County– I think it was not the intention that this class of charges was to be parcelled out between the City and county, by critical discussions on the words “citizen” “pauper” and the like–3
Dec: 18– 1854. A. Lincoln–
1Abraham Lincoln wrote and signed this document.
2No additional documents related to John Fitzgerald have been located; therefore, it is unclear who requested that Lincoln determine whether Springfield or Sangamon County bore legal responsibility for him.
3Article thirteen, section four of the city charter outlined Springfield’s legal and financial responsibilities with regard to those deemed paupers. Section four specifically exempted Sangamon County from the support of any citizen of the city who became a pauper. State law, however, gave the responsibility for paying for the care of non-resident paupers becoming sick or dying to the respective counties.
“Chapter LXXX: Paupers,” 3 March 1845, Revised Statutes of Illinois (1845), 402-5; “An Act to Reduce the ‘Act Incorporating the City of Springfield,’ and the Several Acts Amendatory Thereof, Into One Act, and to Amend the Same,” 2 March 1854, Private Laws of Illinois (1854), 35, 69-70.