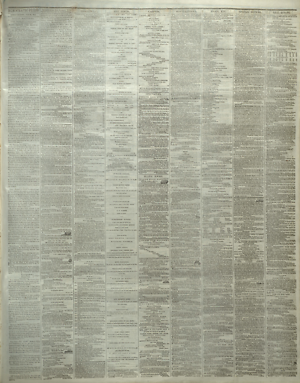 Summary of Speech at Chicago, Illinois, 19 July 18561
Meeting Saturday Night.— A large meeting was held in Dearborn Park on Saturday evening, to hear the speech of Mr. Lincoln, and we have never seen an audience held for so long a time in the open air to listen to an argumentative speech. The speaker was calm, clear and forcible, constantly referring to indisputable facts in our political history, and drawing conclusions from them in favor of supporting the Anti-Nebraska platform and nominees,2 that were unanswerable. He showed how the South does not put up her own men for the Presidency, but holds up the prize that the ambition of Northern men may make bids for it.3 He demonstrated in the strongest manner, that the only issue now before us, is freedom or slavery, that the perpetuity of our institutions is dependent upon maintaining the former against the aggressions of the latter, and held up the bug bear of disunion, threatened by the slavery extensionists, to the scorn and contempt it deserves.4
1On July 21, 1856, the Daily Democratic Press published this summary of the speech that Abraham Lincoln delivered in Chicago, Illinois on July 19. The Peoria Republican published another summary of the speech on July 25. The original speech in Lincoln’s hand has not been located.
Peoria Weekly Republican (IL), 25 July 1856, 2:1.
2This is a reference to the Republican Party’s platform and nominees for the 1856 Federal Election. During its national convention in June 1856, the Republican Party nominated John C. Fremont as its candidate for president and William L. Dayton as its candidate for vice president. For a full version of the Republican Party’s platform for 1856, see Proceedings of the First Three Republican National Conventions of 1856, 1860 and 1864 (Minneapolis, MN: Charles W. Johnson, 1893), 43-45.
Proceedings of the First Three Republican National Conventions of 1856, 1860 and 1864, 58-59, 65-66.
3During the 1856 Democratic National Convention, the Democratic Party nominated James Buchanan as its candidate for president. Buchanan was from Pennsylvania.
Daily Illinois State Journal (Springfield), 6 June 1856, 2:1; Jean H. Baker, James Buchanan (New York: Times Books, 2004), 1.
4Lincoln stumped on behalf of the Republican Party from July through November 1856. In an August 1857 letter to James W. Grimes, he noted, “I lost nearly all the working part of last year, giving my time to the canvass.” Ultimately, in the presidential election of 1856, Buchanan defeated Fremont and American Party candidate Millard Fillmore. In Illinois, Buchanan won 44.1 percent of the vote to Fremont’s 40.2 percent and Fillmore’s 15.7 percent.
Michael Burlingame, Abraham Lincoln: A Life (Baltimore: The Johns Hopkins University Press, 2008), 1:426-28, 432; The Lincoln Log: A Daily Chronology of the Life of Abraham Lincoln, 1 November 1856, http://thelincolnlog.org/Results.aspx?type=CalendarDay&day=1856-11-01; Cong. Globe, 34th Cong., 3rd Sess., 652 (1857); Howard W. Allen and Vincent A. Lacey, eds., Illinois Elections, 1818-1990 (Carbondale and Edwardsville: Southern Illinois University Press, 1992), 10.